Chat with us, powered by LiveChat
Top Posts
How to Play Master of Puppets...
Do Ukulele Skills Transfer to Guitar?
Basic Ukulele Chords Everyone Should Know
Which Ukulele String Is the Thickest?
How Ukulele and Guitar Are Different
Ukulele Keys And How To Understand...
Are Ukulele Strings Metal or Plastic?
Ukulele Jam Sessions!
Is the Ukulele Easier than the...
How to start playing your Ukulele...
Home Articles Which Ukulele Is The Smallest?
ArticlesSizes and ComparisonsUkuleleUkulele Reviews

No, it's not the Soprano!

written by Marialejandra Araujo May 14, 2022 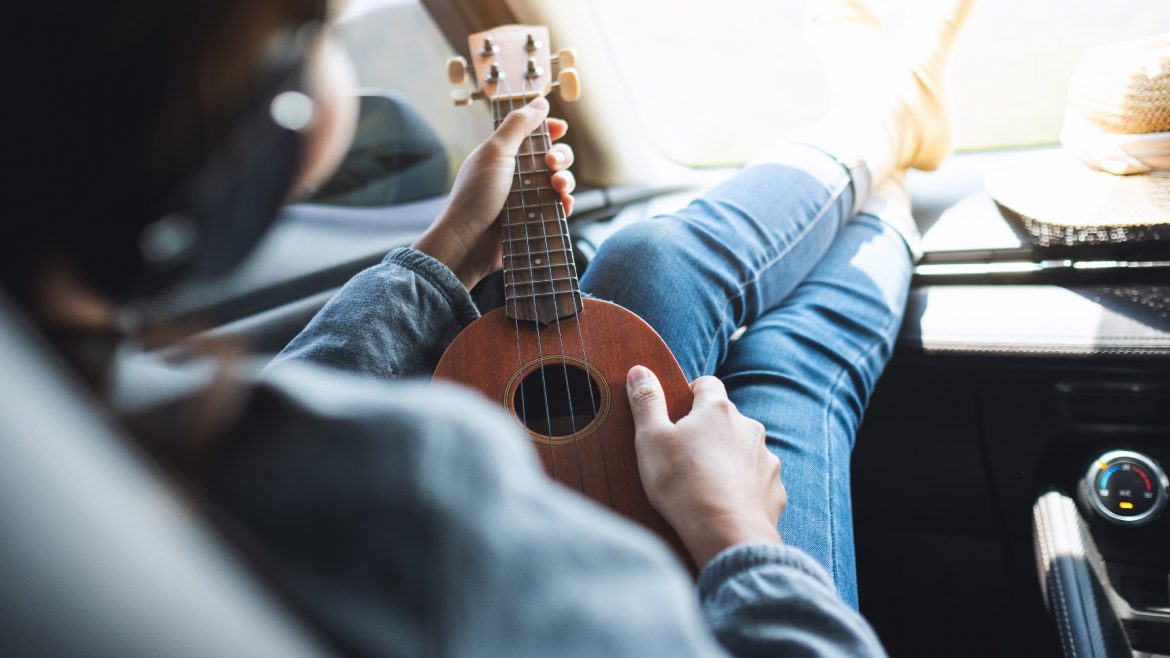 The smallest ukulele? You may have heard that size doesn’t mean everything, right? While it might be true in other circumstances, when playing the ukulele it makes a lot of difference. Given that there are various ukulele sizes, what is the main criterion to choose one from another? Well… That depends only on what you’re looking for according to your needs, desires, fingers, and other aspects.

For example, somebody with short fingers might feel more comfortable with the smallest ukulele available out there. Of course, that’s not written in stone as some skilled players can adapt themselves to play any kind of ukulele. For beginners, choosing an instrument that feels comfortable to play with is key.

Based on their size, ukeleles can produce different sounds. Even though the four main uke types share the same shape, their different sizes alter their scale length and string tension. A shorter string makes the highest pitch (soprano) while the longer ones will give you a lower pitch (baritone). 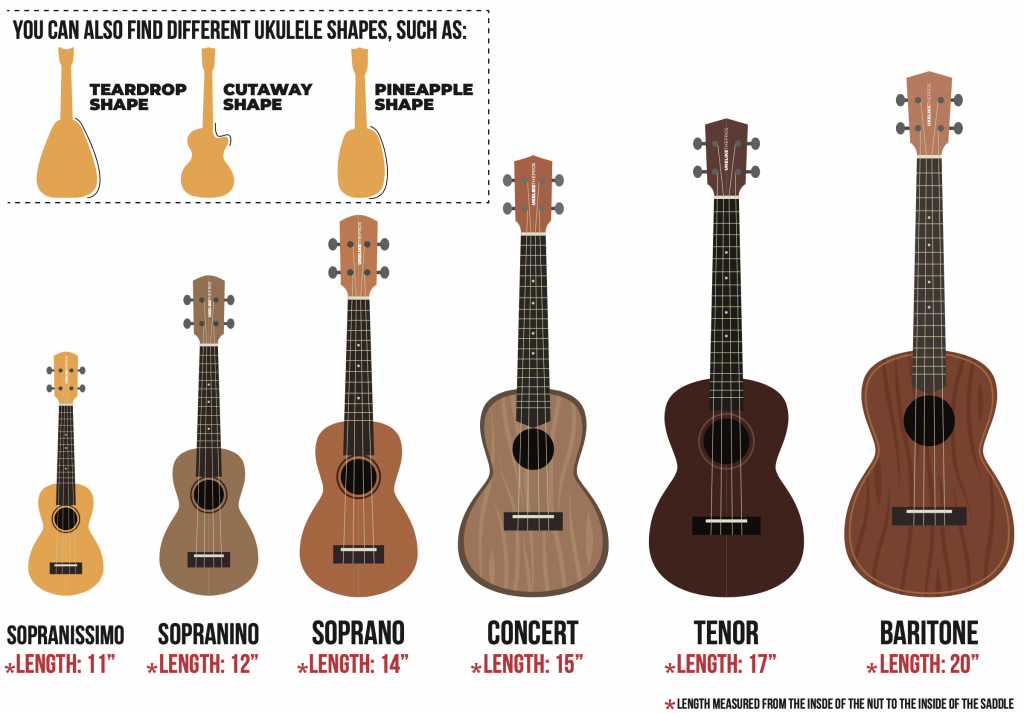 That’s the basis to classify them as soprano, concert, tenor, and baritone ukuleles. Each of them produces unique tunes and brings distinctive uke sounds.

Known as the traditional uke, its appearance dates back to 1880 when was created following guitar-like instrument models. Portuguese from Madeira, the Azores, and Cape Verde brought them to Hawaii. Since then, it’s hard to disassociate them from Hawaiian culture.

Any traveler musician would find them comfortable because of their lightweight as it is one of the smallest standard ukes. Having a total length of 21 inches (53 cm), it tends to be the cheaper option out there as it uses fewer materials.

Soprano ukes are best suited for beginners and those looking for making the traditional Hawaiian sounds. Because of its size, it is also suitable for kids and anyone with small fingers. 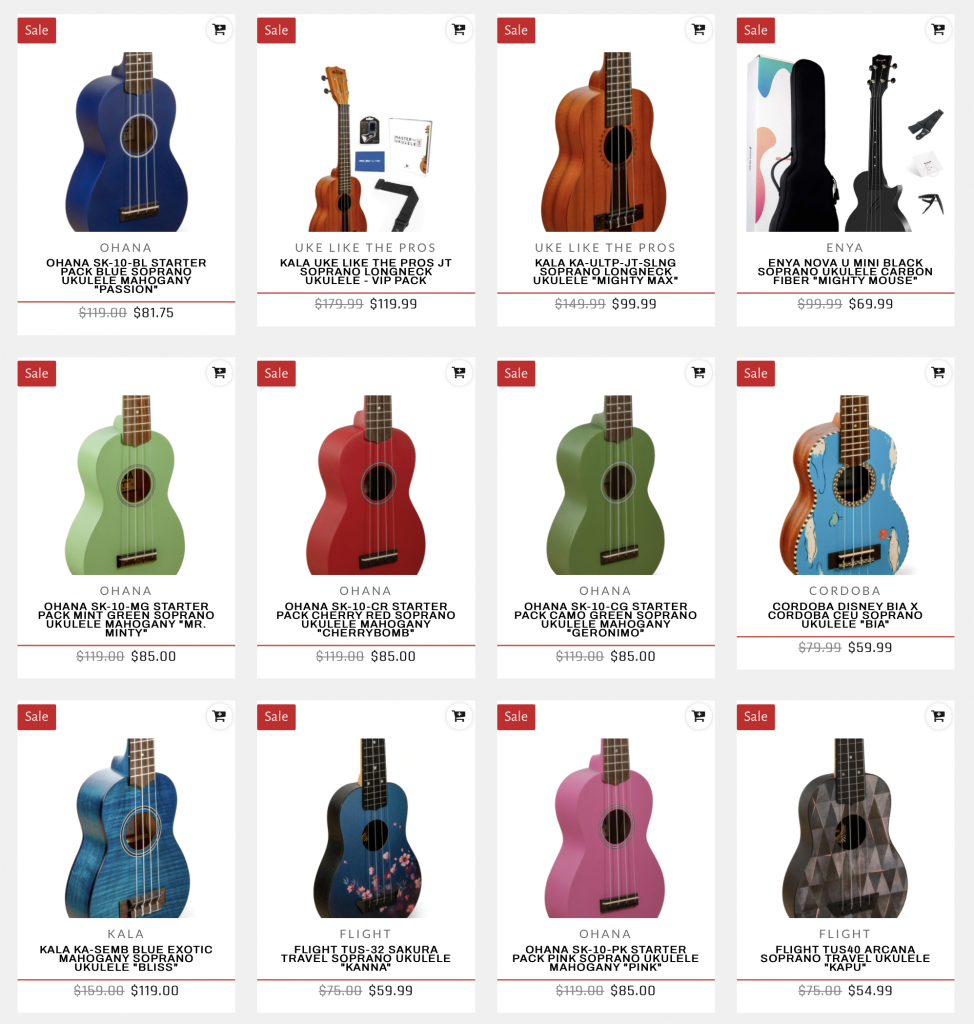 However, there are even smaller versions known as sopranino and sopranissimo.

Sopranino versions come in a total size of 19 inches (48 cm) with a scale length of 13 inches (33 cm). Sopranissimo, on the other hand, is 17 inches in total size and its scale length is about 11 inches (28 cm). That’s the reason why they are also known as ‘pocket ukes’. Apart from their size, they are pretty the same. 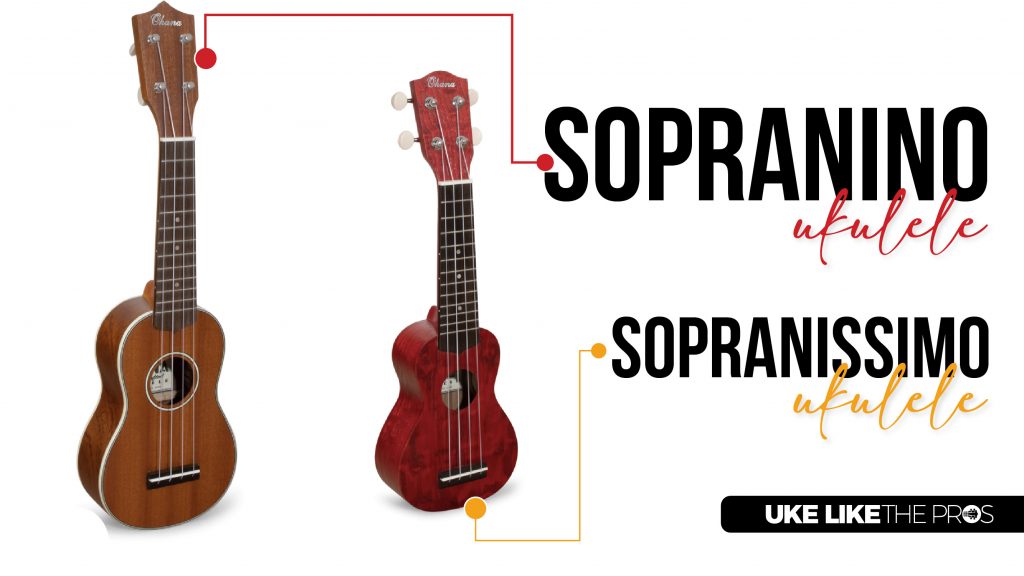 Also known as alto uke, the concert version was developed in the 1920s as a means to make a louder tone. This uke variation was first introduced by the German Christian Friedrich Martin. Before coming up with the concert uke we already know, he tried several versions, some of them with 8 strings, but they were not successful.

It was until 1924 that Martin showed his new uke variation, now called the concert version. He would describe it as “a large ukulele with a tone of great carrying power.” By that time, it was known as the largest uke available, but it didn’t stay that way for a long time as other variations were developed. 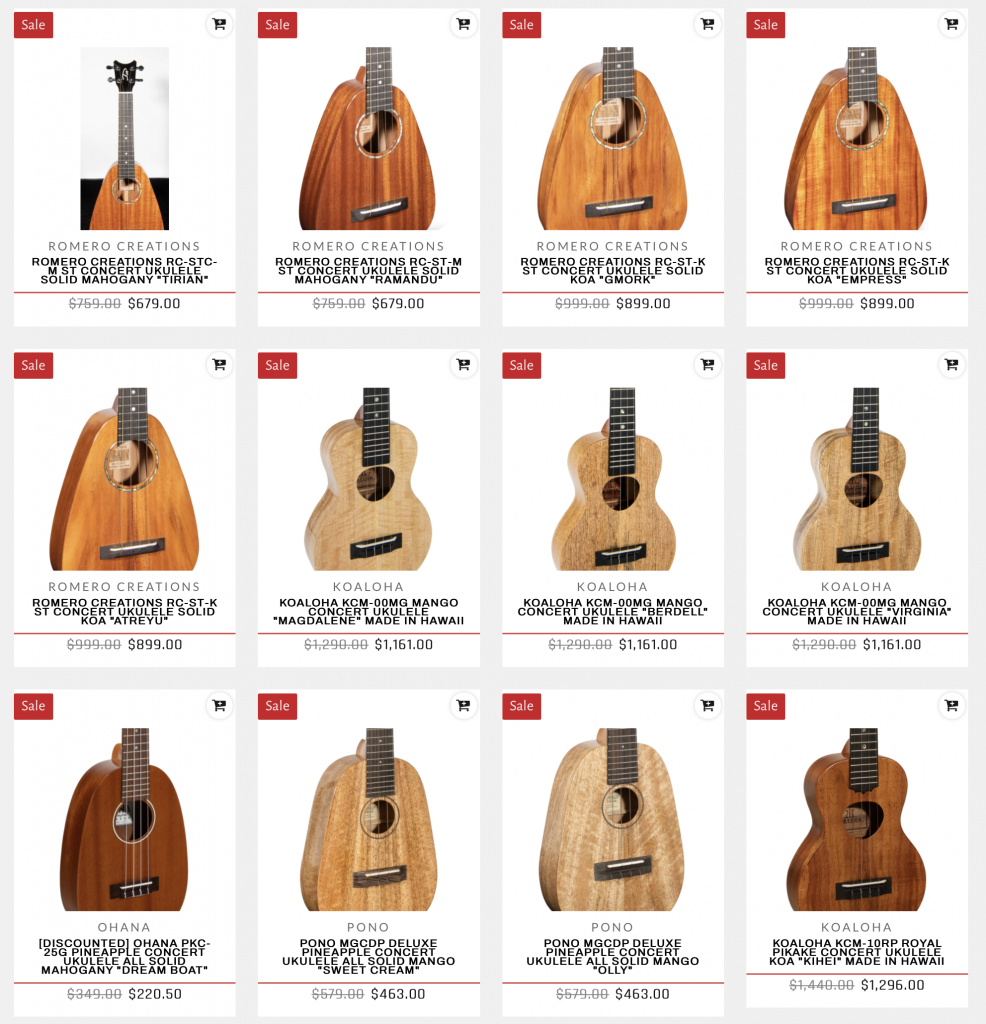 As you have figured out, concert ukes are between soprano and tenor versions with a total length of 23 inches (58 cm) and a scale length of 15 inches (38 cm). Even though they are also tuned GCEA, their sound is a bit different, with stronger, deep vibrations.

If concert ukes have a strong presence, tenor versions are even stronger. With longer strings, tenor ukuleles produce a lower pitch than them. They are also known as taro patch or Liliu.

As one can expect, they are slightly bigger than concert ukes, having 26 inches (66 cm) in total length and 17 inches (43 cm) in scale length. Just like the soprano and concert uke, they are commonly tuned to GCEA (“high G”), but can also be tuned to low G (G3C4E4A4). There are other alternate tunes for this uke which makes it more versatile than the other versions. 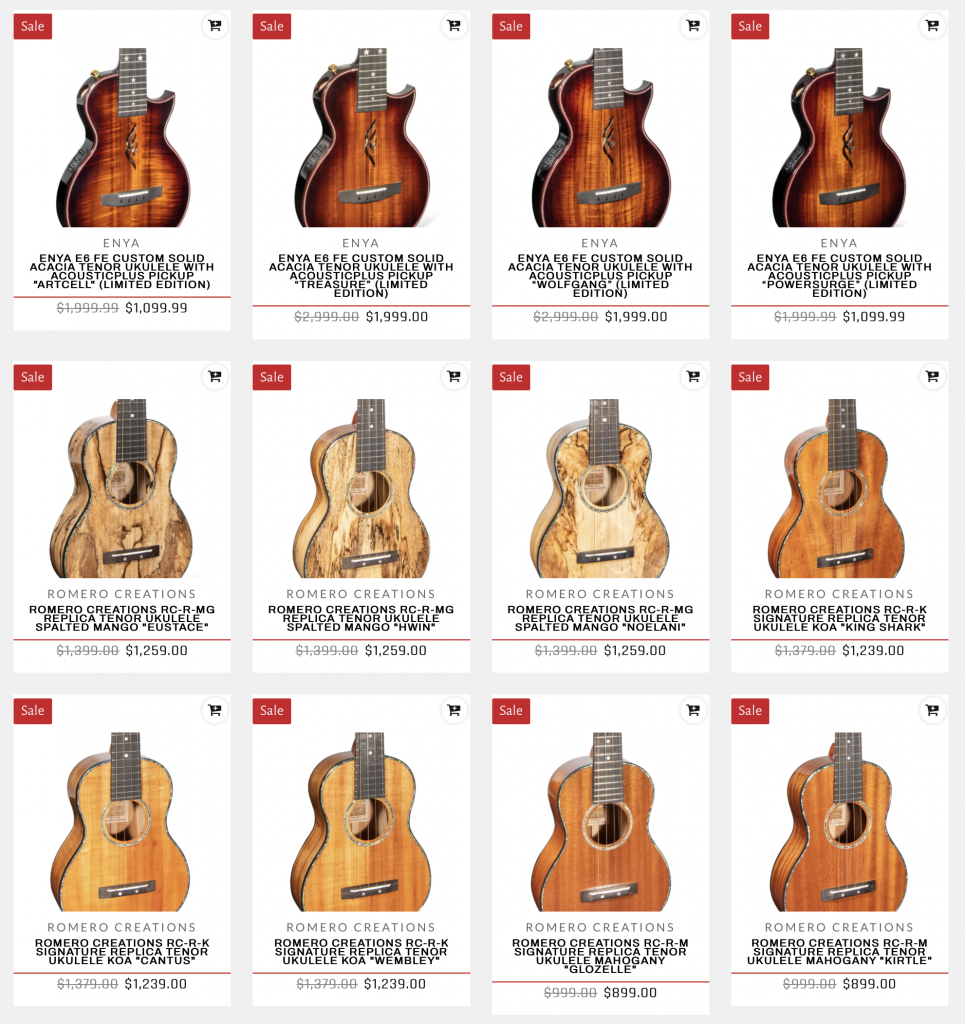 Likewise the concert uke, the first tenor version was developed by C.F. Martin, only 4 years after, making it the largest uke at the moment. Given its bigger size, it can produce more complex sounds which makes it suitable for those already having some experience with smaller versions.

Lastly, baritone ukuleles are the biggest ones of the standard ukes. Most guitar players will feel at home with this uke as its size is similar to standard guitars’. That’s why this uke version is not suited for beginners as its tuning differs from the standard GCEA.

As with everything, there is an exception. Guitar players who want to be introduced to the uke world might want to put their hands on a baritone uke because of the similarities it has with standard guitars. 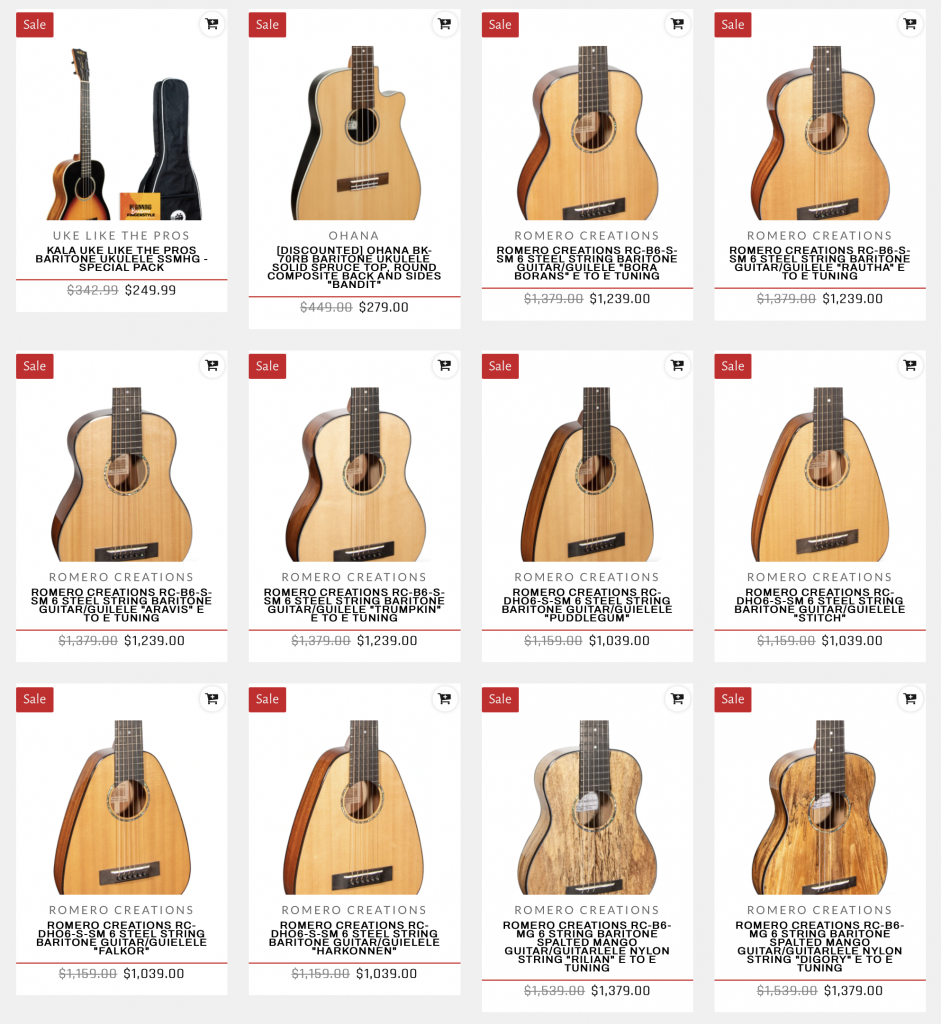 With larger strings, this uke makes an even deeper and more resonant sound due to its low frequency. And what about its size? Bari bari ukes, another name for this uke, come at 29 inches (74 cm) in total size with 19 inches of scale length.

So, which is the smallest uke out there? That would be the sopranissimo uke. For more information, consider joining our ukulele community at ukelikethepros.com where we discuss all things related to ukes. Stay tuned!

What are the Differences Between a Ukulele and a Guitar?

The Most Essential Ukulele Accesories That You...

Can You Play Any Song on the...