Chat with us, powered by LiveChat
Top Posts
How to Play Master of Puppets...
Do Ukulele Skills Transfer to Guitar?
Basic Ukulele Chords Everyone Should Know
Which Ukulele String Is the Thickest?
How Ukulele and Guitar Are Different
Ukulele Keys And How To Understand...
Are Ukulele Strings Metal or Plastic?
Ukulele Jam Sessions!
Is the Ukulele Easier than the...
How to start playing your Ukulele...
Home Articles What are the Differences Between a Ukulele and a Guitar?
ArticlesSizes and Comparisons

What are the Differences Between a Ukulele and a Guitar?

The Ultimate Guide Between These Two Instruments 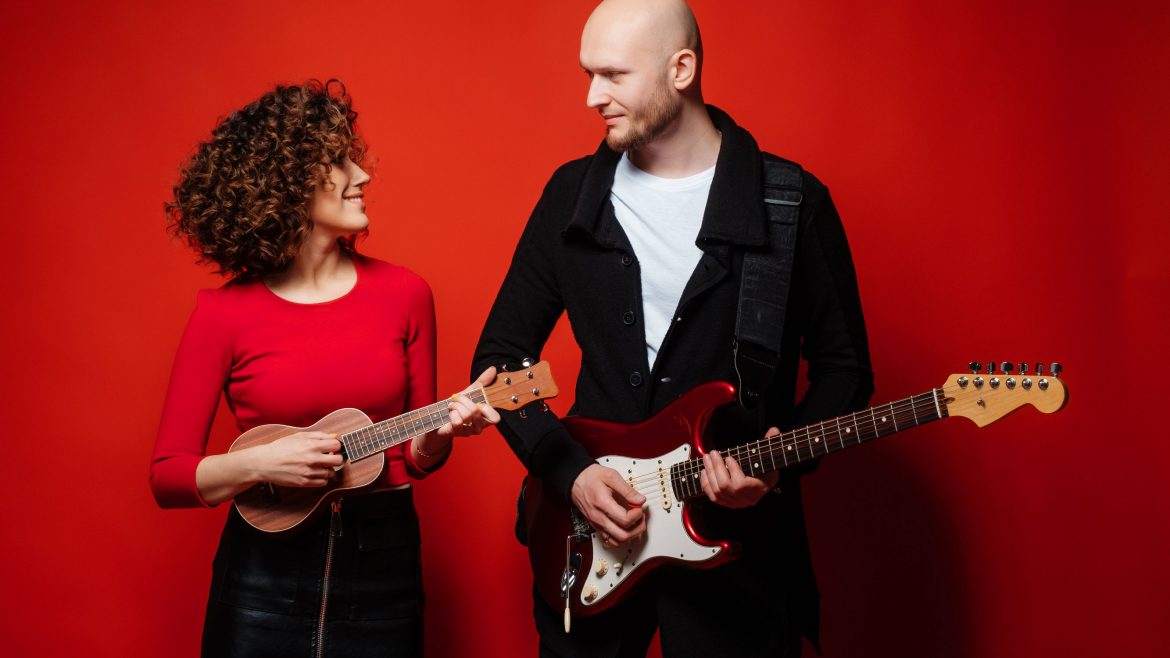 Even though ukuleles and guitars have many similarities as far as both of them being stringed instruments that you can strum or fingerpick, as well as them having the same general body shape, there are also many distinct differences between the two instruments, and in today’s article, we’re gonna dig deep into them!

Some aspects that make these instruments different from one another can include how many strings they have, how they are tuned, their chord structures and their overall tones.

So, in this article, we’ll go over some of the main differences between a ukulele and a guitar, as well as some of their main similarities. We’ll also introduce you to the baritone ukulele and the guitarlele, which are great transitional instruments between ukes and guitars. Lastly, it should be noted that for the purpose of this article, we will be focusing solely on acoustic ukes and guitars.

Probably the first noticeable difference between ukuleles and guitars is their sizes. As for ukes, whether it’s a soprano, concert, tenor, baritone or guitarlele, its overall size will be significantly smaller than any standard acoustic guitar. Not only will the size of a ukulele’s body be much smaller and thinner than a guitar, but the length of its neck will also be shorter.

And, depending on the style of the ukulele, it can have anywhere from 12 to 25 frets, whereas guitars will typically have 20 to 25 frets depending on the model. Also, a ukulele’s neck will have less space between frets due to its shorter neck, giving you less space to place your fingers on the fretboard when playing.

At first glance, it will be easy to see that a ukulele has four strings, whereas a guitar has six, which is another major difference between the two instruments. Also, the type of strings that are used can sometimes be the same, but are typically very different. Nylon strings are the most common type of strings for ukes, however, there are also ukulele strings that are wound with various metals to give it more projection.

As for guitars, most acoustic guitars use wound, metallic strings made from steel, which are great for strumming, picking, and overall projection. But, there are also nylon strings for acoustic guitars, which are most commonly used for classical guitars and are usually played with a finger picking technique rather than strumming with a pick. 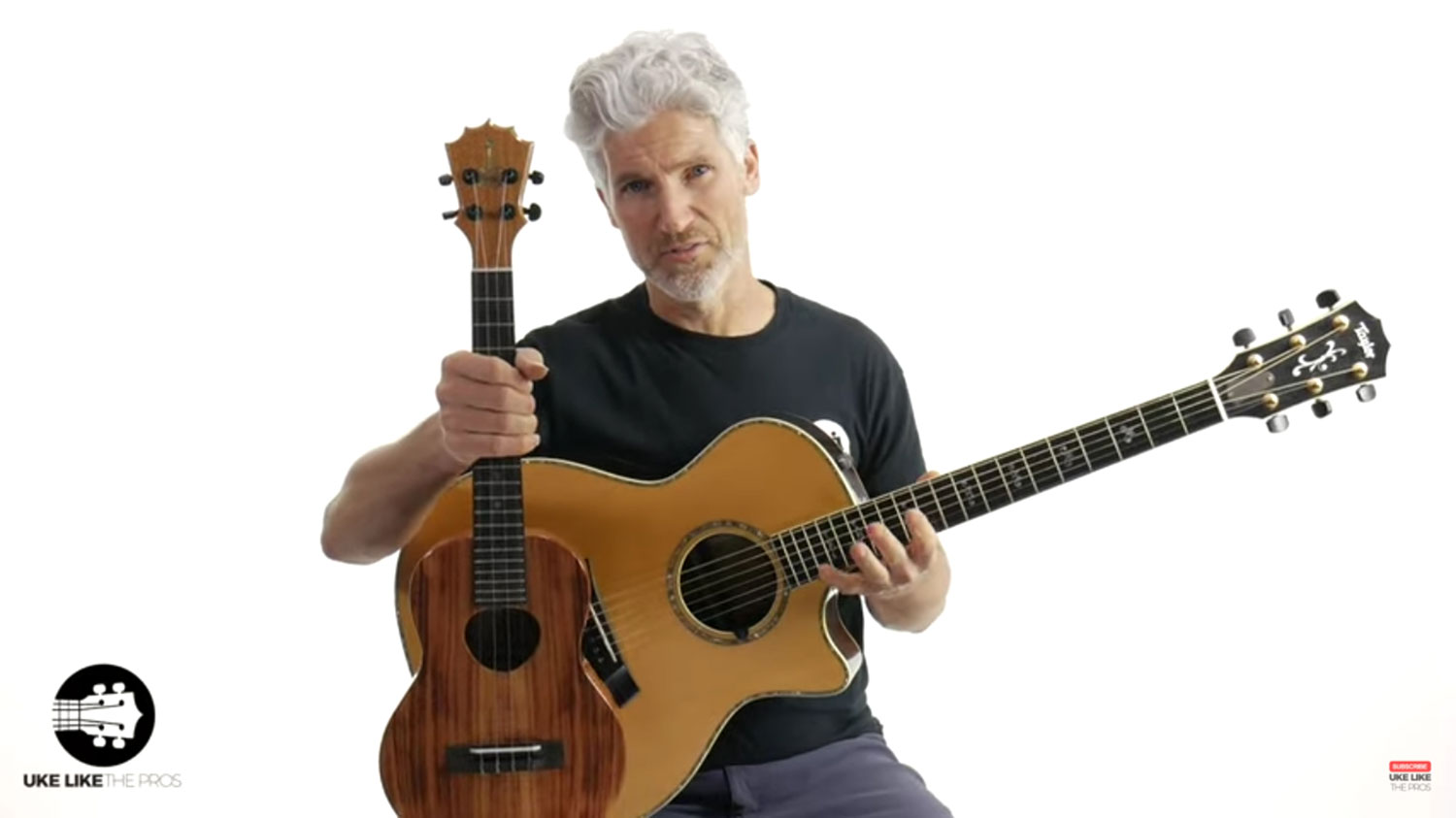 The overall size between a ukulele and a guitar are very noticeable.

That being said, the type of strings that you use for either instrument really depends on what type of music you want to play, along with your overall playing style.

Be sure to check out our large selection of ukuleles, baritone ukuleles and guitarleles available at our online store.

Since the tuning and number of strings are different when it comes to ukes and guitars, another significant variation between the two instruments may appear to be in their general chord structures. However, you may find that there are an equal amount of similarities to go along with their differences.

Regardless of whether you’re playing the guitar or the ukulele, the basic chords all have very similar shapes that either require you to press your fingertips onto the strings against the fretboard or flattening your fingers across multiple strings at once, which is also known as “barring.” 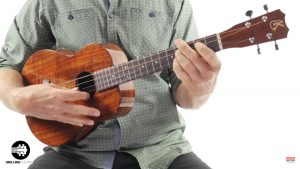 The chord structures between ukuleles and guitars are surprisingly similar.

Another noticeable difference between ukuleles and guitars is their overall tone and loudness. Due to a ukulele’s smaller body size, a uke’s tone and projection won’t be as loud, deep or as full as an acoustic guitar. Also, if an acoustic guitar is strung with steel strings, it will sound much louder than a ukulele that uses nylon strings.

However, any ukulele with nylon strings will give it a more distinct sound than any guitar, which is what sets ukes apart from guitars. And, the variation of ukulele models will give you a better landscape of higher tones depending on which model you choose to play.

Also, the nylon strings on ukuleles are definitely more comfortable on your fingertips compared to the steel strings on acoustic guitars. Lastly, pay attention to the size of your body when it comes to selecting your instrument. If you have a smaller frame or smaller hands and fingers, then you might find that a ukulele will be a better fit for you compared to a guitar.

Read more: Which Ukulele is the SMALLEST?

A great ukulele for transitioning between the uke and the guitar is the baritone ukuele. The baritone has a larger body size than other types of ukes, giving it a deep, rich sound, and its longer neck makes it very easy to play if you have larger hands and fingers.

Also, the tuning of a baritone ukulele is (from top string to bottom string) D, G, B and E, which is identical to the tuning of the last four strings of a guitar. Because of its tuning, the chord structures are very similar to a guitar, making the transition between it and a guitar more effortless.

Make sure to take a look at all of our baritone ukuleles available at our online store here.

Another very solid bridge between the ukulele and the guitar is the guitarlele. A guitarlele has all of the tonal elements, body size and neck length of a tenor uke, but it also has six strings like a guitar. (It’s important to point out that the neck of a guitarlele will be thicker to accommodate its two extra strings.)

As mentioned before, the tuning for guitar strings is (from top string to bottom string) E, A, D, G, B and E. The tuning for the strings on a guitarlele (from top string to bottom string) is A, D, G, C, E and A. The structure of how the strings are tuned on both instruments is the same, they’re just tuned to different notes. So, if you put a capo on the fifth fret of a guitar, you will match the exact tuning of a guitarlele.

As for chords, you can play exactly the same chord structures for both a guitarlele and a guitar, and you and a bandmate can play both instruments together and match their tuning with the simple use of a capo, which makes the guitarlele even more advantageous. Other benefits of a guitarlele are that the smaller body often makes it easier to play, especially for beginners, its nylon strings are definitely more comfortable on your fingertips, and you will get a much more authentic ukulele sound compared to playing the guitar on the fifth fret.

Our online store has a great selection of guitarleles and we also offer custom setup options. 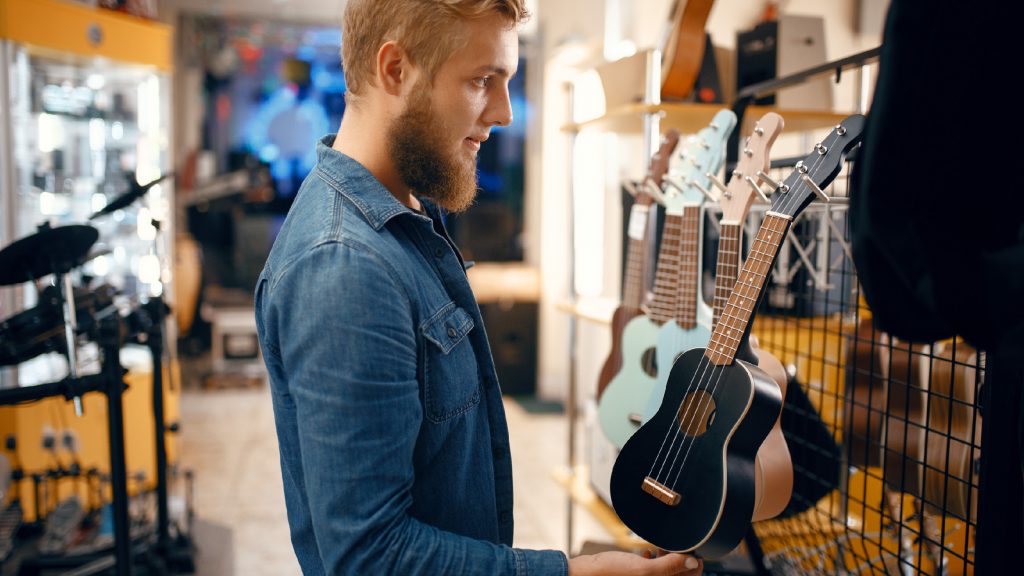 As you can see, there are quite a few differences between ukuleles and guitars, but there are also quite a few similarities, too. Which type of uke you choose to play all depends on what kind of style and playing experience you want. Whether you’re just getting started or even an advanced player, it’s easy to find a ukulele that’s perfect for you.

And, the Uke Like The Pros Online Store has several styles of ukuleles that we can customize for you, which can help take the strain off of your shopping.

Also, be sure to check out our collection of online lessons, books and accessories for all your ukulele needs.

How to Use the ULTP Ukulele Chord Chart and Videos

The Passing of Ukulele Ray