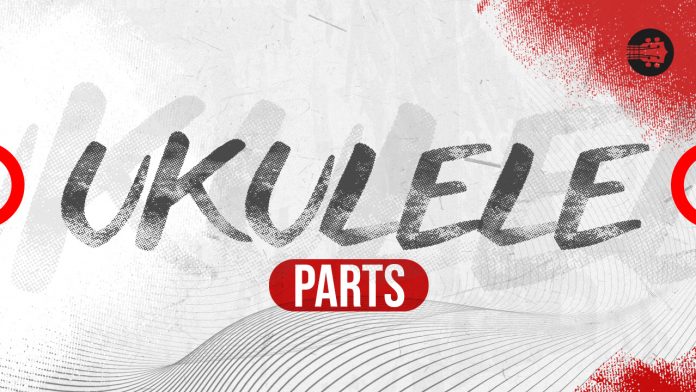 If you want to have a reasonably informed conversation with your music teacher, or want to look knowledgeable in front of your friends when you are playing, you need to know the names of the various ukulele parts.

Some are obvious, some are a bit more obscure, but we’ll take you through everything you need to know about the anatomy of a ukulele, from the headstock to the strings to the frets.

Whether you are using a soprano, tenor, baritone, or even a concert ukulele, the parts of the instrument are the same. So, whatever you play, you’ll find the information you need in our complete ukulele anatomy guide. 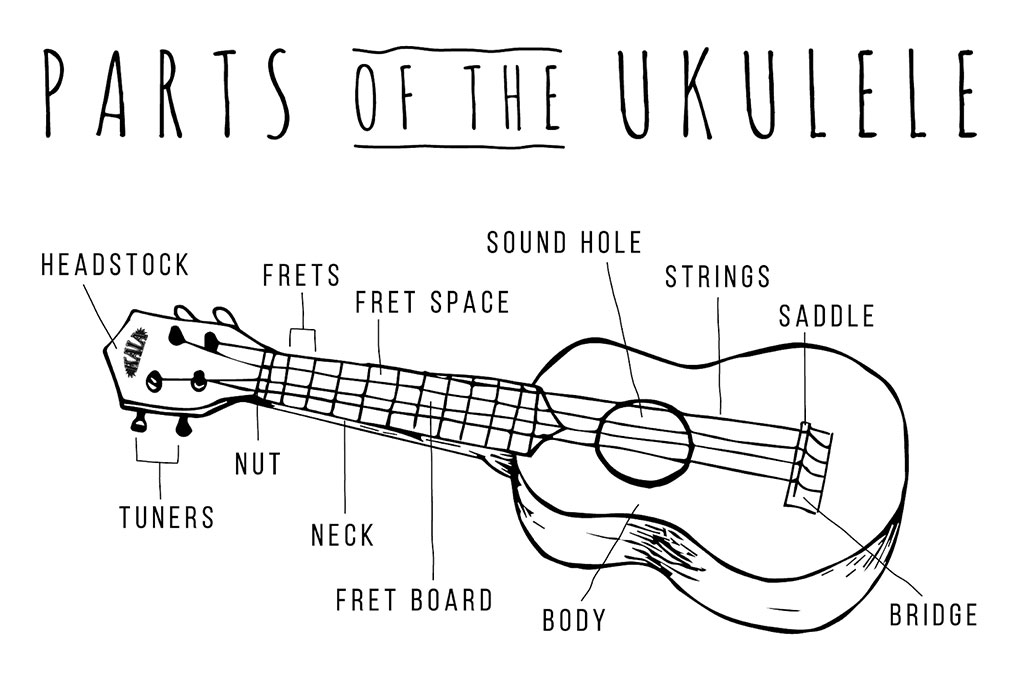 Parts Of The Ukulele

The tone that your ukulele will produce depends principally on the body, as the vibrations produced by strumming the ukulele are captured and amplified by the body.

While ukulele bodies come in many different shapes and sizes, these days many have a cut-away shape. This means that the shoulder of the body is significantly smaller. The purpose of this is to give you easier access to the frets.

Read More: How to Hold an Ukulele?

The bridge is the piece on the front of the body, which holds the strings in place and holds them down on the body. On most ukuleles, this piece will usually be glued down. There are three standard types: a tie-bar, through the body, and a pin bridge.

A tie-bar has small holes in it through which you can thread the strings There is then a technique for tying the strings to the bridge to secure them.

A pin bridge works much like the bridges you see on guitars. First, pull the pin out of the bridge. Tie a knot in the end of the string (use a double knot for thinner strings). Push the knot of the string into the bridge hole and then put the pin back into the bridge and string as usual. While tuning, put pressure on the pin so it doesn’t pop out.

The saddle is the long, narrow strip that sits on top of the bridge, on the side of the bridge closest to the soundhole. The strings rest on the saddle to lift them up to the correct distance from the body and the fretboard.

The saddle is often made from plastic or a material such as bone.

If you strum directly over the soundhole, you will produce a noticeably louder sound than if you strum further up or down the strings.

Many ukuleles will have an inlaid pattern around the soundhole. This is called the rosette and is purely for aesthetic purposes.

Some ukuleles have been putting an additional small sound hole on the side of the ukulele called a soundport.

The strings of the ukulele are the four strings that extend along the length of the instrument. They are made from either nylon or wound metal. Soprano,concert, and tenor ukuleles tend to use fluorocarbon, nylon, or nylgut strings. Some low G tenors and  baritones can use some  metal-wound strings on the lower strings.. You may occasionally see steel strings, but these aren’t appropriate to use with most ukuleles as they will damage the instrument due to the higher tension.

Metal-wound strings tend to produce a crisper tone and louder sound. The strings of tenor, concert, and soprano ukuleles are usually tuned to G4, C4, E4, and A4, which is different from most stringed instruments, which are usually tuned from lowest to the highest note in progressive order. This type of tuning is called re-entrant tuning or simply called high G.

Looking for new strings for your ukulele? You’ll find all the best brands here.

The neck is the long, thin piece of wood that attaches to the body. While the front is flat (called the fretboard), the underside is curved so that it sits comfortably in the supped hand of the player. Mahogany is the most common wood for necks  as it needs to be strong to hold the tension of the strings.

The front side of the neck, which is flat and sits under the strings, is called the fretboard. It is usually dark in color, very often black on a ukulele, which creates a contrast with the strings. Ebony and Rosewood are the most common woods used as fretboards.

The frets are the small metal bars that are attached to the fretboard at specific intervals. They stick up from the surface of the fretboard so that you can use your fingers to hold the strings down between the frets. This changes the tension of the string, which in turn changes the note produced when it is strummed or plucked.

The frets are placed to change notes at semi-tonal increments. To achieve this consistently, the space between the frets gets increasingly smaller as you move closer to the body.

A ukulele works in a similar way to a guitar, in that when you push down on the string, it is the fret that marks the position of the note, rather than your finger itself. This is in contrast to instruments such as the violin or cello, where there are no frets and the finger holds down the string. It is harder to get notes in tune on instruments that don’t have frets.

Read more: Why Does My Ukulele Sound Bad?

You will notice small dots both on the front of the fretboard and on the side of the neck between certain frets. They are usually placed on the third, fifth, seventh, tenth, and twelfth frets. This is just to help players identify the frets they want at a glance when playing.

The nut is the small ridge that sits between the headstock and the fretboard. The strings rest on the nut in small grooves designed to keep them spaced correctly. It also holds the strings up at the correct distance from the fretboard for the player to be able to play the strings and push down on the strings to create different notes.

The headstock is the wider piece at the top of the neck that holds the tuning pegs. Brands will often use a distinctive shape for the headstocks of all their ukuleles to make them immediately identifiable by sight.

These are the four pegs on the headstock around which each of the strings is wound to tune them. Each string will be inserted through a small hole, which traps the string. Then, when you turn the peg, the string wraps around a metal cylinder, tightening or loosening the string.

When you tune your ukulele, it is a good idea to slightly unwind the string before tightening it to find the correct note. This prevents string breakages and overstretching.

If your ukulele has a pickup, it will also have a jack input on the butt of the body that allows you to connect the instrument to an amp.

If you are looking for an amp for your ukulele, check out our favorites here.

The strap is the piece of fabric that you attach to the ukulele in order to hang it over your shoulders, to keep it in place without having to hold the weight of the instrument yourself. This is optional.

If your ukulele does not have buttons, you can add them. But if you would prefer not to drill into your ukulele, there are also some straps that work by attaching to the soundhole.

So, there you are. The next time you have a conversation with your music teacher, don’t feel nervous that you might struggle to use the right words and explain what you mean. When you pop into the music store, have an informed conversation with the staff. Playing for your friends? Impress them with your knowledge of the ukulele as well as with your playing.

The Most Essential Ukulele Accesories That You Need

The Most Essential Ukulele Accesories That You Need

Somewhere Over The Rainbow Ukulele Tutorial