Chat with us, powered by LiveChat
Top Posts
How to Play Master of Puppets...
Do Ukulele Skills Transfer to Guitar?
Basic Ukulele Chords Everyone Should Know
Which Ukulele String Is the Thickest?
How Ukulele and Guitar Are Different
Ukulele Keys And How To Understand...
Are Ukulele Strings Metal or Plastic?
Ukulele Jam Sessions!
Is the Ukulele Easier than the...
How to start playing your Ukulele...
Home UkuleleNews UkeCon Fest is happy to welcome: “Viggy” Kolasinski
News

Age is not a limit to be awesome! 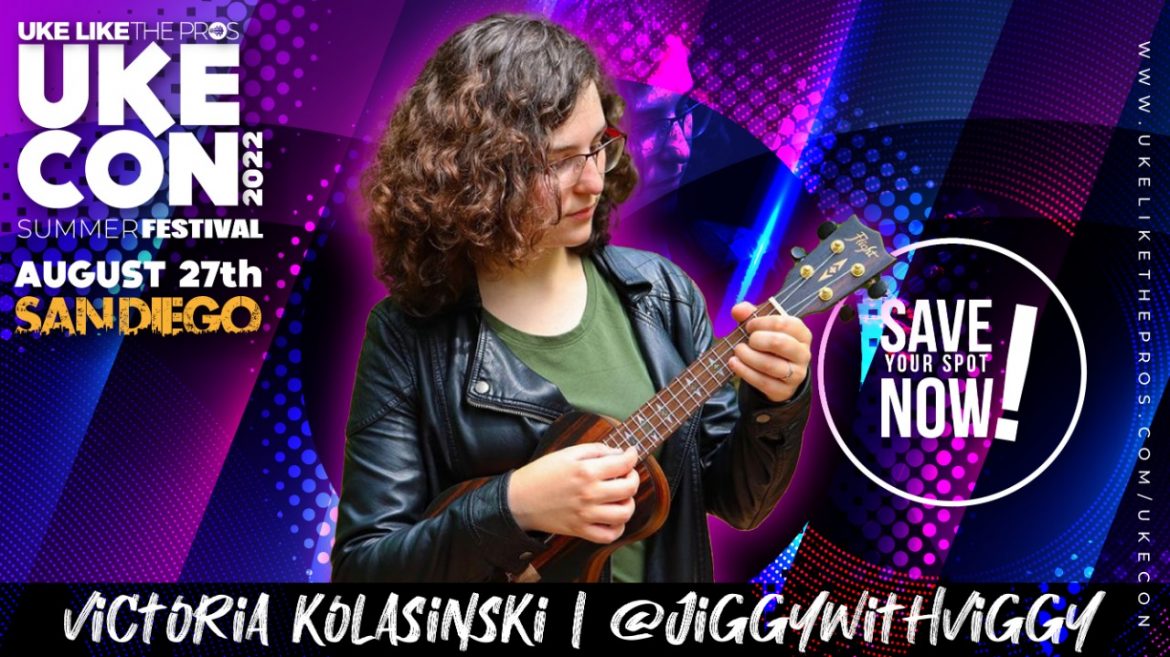 It’s time for a girl called Victoria Kolasinski, better known as Viggy, to enter this artist hall, so we can learn more about her ukulele story, how she started playing this 4 string instrument, and how she has grown quickly on Social Media platforms thanks to her talent and her alliance with Flight Ukuleles.

So, without any further ado, let’s welcome Victoria!

Ok, Viggy, tell me about your Ukulele story?

I started playing the ukulele as a freshman in high school (so 2014). A friend of mine had one and we used to spend our free periods in the music wing of our school, so that’s where I got my first taste! The first song I learned was a song called “Screen” by Twenty One Pilots. My band teacher also played the ukulele so after I got my “sea legs” so to speak, I would learn and practice with him during my lunch periods all the way until graduation. I was introduced to chord-melody style playing ala Shimabukuro and Hill right off the bat, so going forward post-high school I started to take these playing styles and apply them to some of my favorite songs.

I’d be lying if I said I played every single day at that time after I graduated, though. I went off to college for filmmaking and I didn’t play ukulele as much as I used to, and that made me sad! After a while, filmmaking proved to be the wrong path for ‘ol Viggy, so I dropped out of college just before the pandemic and spent the time at home carving out time to reignite my love for this instrument. I started to post videos on TikTok and Instagram of any song I played, and soon enough I had hundreds of thousands of people asking for song requests in tutorials! My filmmaking skills came back into play as I began to edit videos more thoroughly, and all of my ukulele experiences have led me to today! Last April I partnered with Flight Ukulele and have been an exclusive artist with them since, and I do think that their help and promotion have led me to this very Q&A today! I’m very grateful for it all and I’m really happy that I am able to not only teach ukulele but to still learn new skills and techniques every day because of the amazing and endlessly expanding ukulele community.

How did you get started with music and what led you to the ukulele?

I was raised in a very musical household. My dad and brother are both drummers, my mom plays the guitar, and my sister plays the french horn. Growing up, my siblings and I were always in the balcony seats for whichever band my dad was performing in at the time, so all of us were constantly exposed to the music world. We debate it often, but my favorite band that my dad has been a member of was a Stevie Ray Vaughn cover band called Cold Shot. They kicked ASS!

I played alto saxophone starting in the fourth grade and was in the school band all through my school years. By seventh grade, I switched to tenor saxophone and stuck with that until high school, where I overheard the music department’s need for a bassoonist. I, with no bassoon experience, offered to learn the instrument over the weekend. Three days, a double reed, and a series of Youtube videos later, I was the band’s bassoon player all the way through graduation! I realized I had an affinity for teaching myself and/or learning new instruments, a skill I took with me into the pit orchestra of my school’s theater department, where for the production of “Hairspray” I played 5 different instruments!

It was a no-brainer to learn how to play the ukulele when I saw my friend bring one into school one day. With bands like Twenty one Pilots on the rise in 2014/15, there was a lot of mainstream influence on the instrument and sooner or later a lot more ukulele players started popping up around the school. There’s a charm and whimsical nature of the uke that you just don’t get with any other instrument, and I think that’s what ultimately drew me to it.

Who are your role models in the Ukulele world?

As a big, –no, HUGE– Beatles fan, I’d be remiss not to mention the great George Harrison as a musical influence and role model. In terms of playing style, however, I have to throw it to the big two: Jake Shimabukuro and James Hill. The first fingerstyle song I learned on the ukulele was Jake’s “While My Guitar Gently Weeps,” which I started tackling really early on in my uke journey. Pretty ambitious, I know! And, I have to throw some credit to my band teacher, Mr. Wilbur, for exposing me to these ukulele titans (and being one himself) and showing me that the ukulele has no bounds!

Since working with Flight Ukulele, I’ve been exposed to even more incredible players from around the world. Musicians like Sammy Turton, Dani Usero, and Ada (@Ukulada on IG) are a masterclass in what the ukulele has evolved into as an instrument and they inspire me every day!

I draw inspiration from whatever music I’m currently listening to, an earworm I’ve heard on the radio, a song suggestion from an Instagram comment, or a close friend… it really depends! In general, I think it’s really good to surround yourself with other creatives and allow that magic to rub off on one another. My boyfriend/partner in crime, Jake, is a ridiculously talented independent comic book writer, and we tend to bounce all kinds of ideas around each other creatively. Hell, he’s responsible for the name Jiggy With Viggy!! We both find inspo for things in songs, media, pop culture, you name it, and it’s really cool to see how two different people can interpret the same piece of whatever into their own style. Inspiration can come from anywhere, the key is making sure your eyes are open to see it!

What 3 tips can you give to people that are starting to learn and improve on the ukulele?

It’s true what they say about music teaching you discipline. Arranging and transcribing songs really sharpens your ear for hearing notes and chords, which is such a cool skill to feel yourself develop over time. I’ve gotten a lot better at it even after just one year of daily posting online and writing stuff out, I can’t wait to see where I’m at in one more year, five years, etc…

What are you excited about for the UKE-CON Summer Ukulele Festival?

I’m excited to be in San Diego! It’s my first time on the west coast, and my furthest travel from home, so I’m really hyped about it. I’m also so grateful and thrilled to be performing and teaching live! It’ll be my third live performance and first time (!!!) teaching a workshop live! It’s going to be a blast.

Meeting some of my ukulele heroes! I’ve been watching Plazi (Bernadette Teaches Music) for years, and it’s going to be SO cool to meet her in person. And, we might do a collab????? So crazy haha!!

Tickets are almost sold out! Do you have any words to the attendees (both in person and virtual)?

Go getcha tickets! It’s gonna be really something special and I’d love to see you there. 🙂 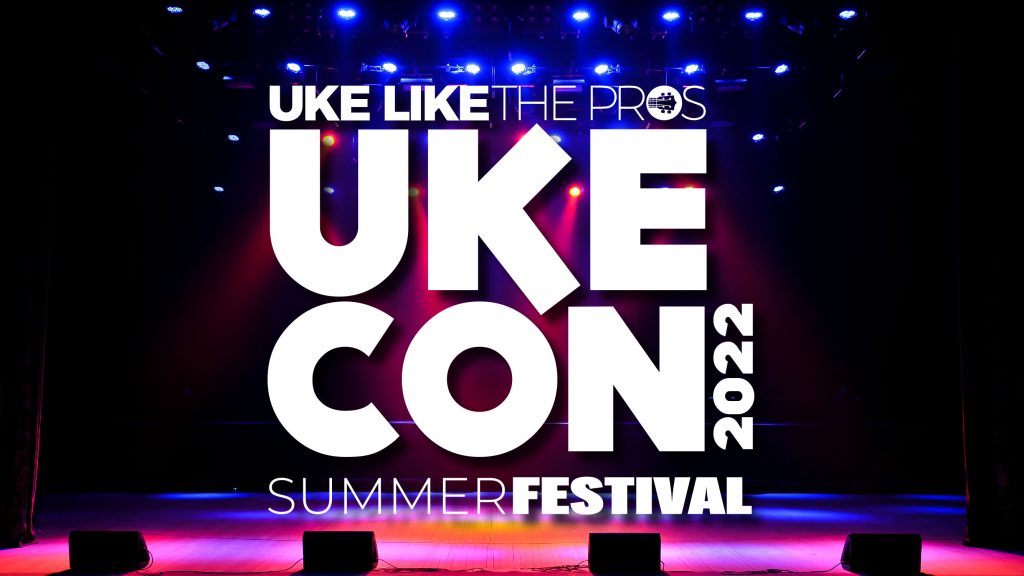 UKE-CON is a great opportunity for people to connect with their ukulele teachers/artists/mentors. What do you like the most about being part of this one-of-a-kind ukulele community?

The question answered itself! It’s a one-of-a-kind community that is full of positivity and healthy vibes. Everyone lifts each other up and just celebrates everything that makes the ukulele so so special.

I just released my first ever fingerstyle songbook, “The Beatles for Solo Ukulele!” I’m really proud of it and It’s something that’s been cooking for a while. I have other songbooks in the works as well, so I’m really happy to be actively cranking out arrangements so fast. I post a new fingerstyle tab on my Gumroad website every Wednesday! I also recently launched my merch line with a logo I designed myself. I’m biased but I think it’s pretty cute! Hah!

Personally, I recently started playing tennis and my backhand is getting pretty good! I was never the kind to pick up sports so I have been enjoying it a lot, actually. My mom and I play for about two hours (!!) every day, and it’s been pretty rewarding both physically and even mentally. I like it! 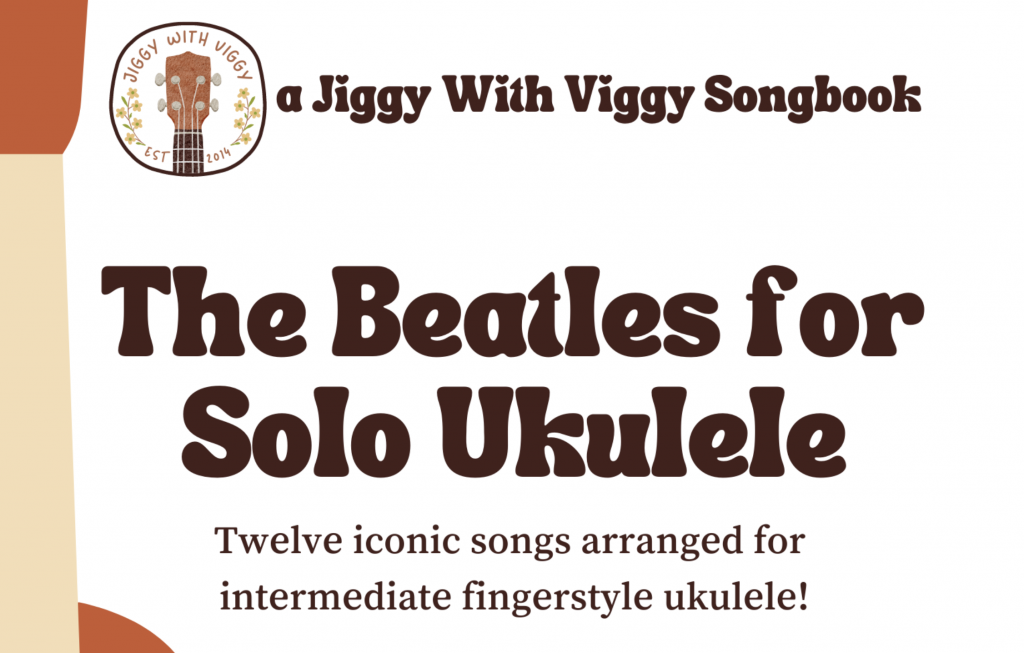 I’m a really big cinephile (movie fan), so here are some of my favorite movie quotes:

It’s funny now, but on my first flight I had a pretty bad panic attack and the flight attendant saw me freaking out so he gave me like ten packs of cookies and I ate all of them in like five minutes. Not my proudest moment, but it’s kind of impressive if you think about it.

Yes!! You can find me on Instagram, Tiktok, and Youtube @JiggyWithViggy. I post fingerstyle covers, tutorials, loop covers, and just all things ukulele related. From there you can find my Linkfly link to sign up for private lessons, find my Gumroad tab site, support me on BuyMeACoffee, and pick up some JWV merch!

Awesome!!! We’re really excited to see you at the UKE-CON Festival 2022 in San Diego, California, on August 27th.

Attending UKE-CON? Here’s How To Make The Most Of Your Trip

Everything you need to know about Boy...