Chat with us, powered by LiveChat
Top Posts
Ukulele Bass: Everything You Need To...
Why Is It Necessary to Learn...
Ukulele Case… Do you need one?
The 10 Best Affordable Ukuleles
Can You Play Any Song on...
Ukuleles Made in Hawaii
Everything you need to know about...
What Are the Advantages to Playing...
Is It Hard to Play the...
Ukuleles That Use Metal Strings
Home Articles UkeCon Fest is happy to welcome: Victoria Vox!
Articles

The magic that happened when the ukulele and the "mouth-trumpet" met! 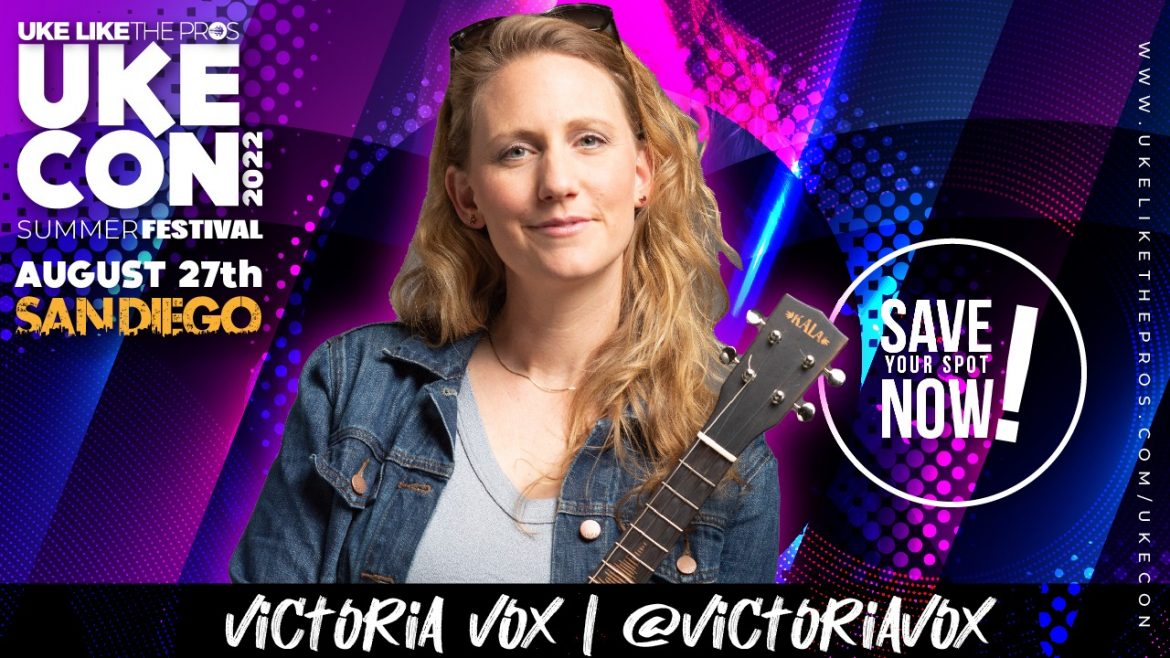 Victoria Davitt, better known as Victoria Vox, is an award-winning, ukulele-toting, performing songwriter. With a passion for writing songs since she was 10 years old, she went on to graduate with a degree in Songwriting from the Berklee College of Music(Boston, MA). In 2003, she traded in her guitar for the ukulele as her main accompaniment and took the stage name Victoria Vox (Latin for voice). Her acoustic music style shifted to chanson tinged with jazz, which, over the years, has settled in nicely with her pop songwriting flair.

Since the release of her first ukulele album in 2006 (Victoria Vox and her Jumping Flea), Vox has been one of the leading songwriters on the ukulele scene and cover girl on both Ukulele Magazine (USA) and UKE Mag (U.K.). She has shared the bill with ukulele greats such as Jake Shimabukuro, James Hill, and the Ukulele Orchestra of Great Britain. As a singer-songwriter, she has also straddled into the folk scene, where she has opened for Jackson Browne, Tom Chapin, Leo Kottke, and Cheryl Wheeler. Over the years, she continued to evolve and reinvent her sound. She now performs mostly as a one-woman band, incorporating a loop pedal and bass effect on her Low G ukulele.

Vox, who also plays the trumpet, is more known for her “mouth trumpet”; a Jazz-era vocal technique emulating the sound of a horn. This odd and quirky talent, nonetheless, landed her on the Tonight Show with Jay Leno in 2009 where she was invited to blow her own horn. In 2015, Vox was featured on the front page (bottom half) of the Wall Street Journal as a leader in the mouth trumpet “revival”. She has also written songs in French, and her music has been used in indie films and heard on indie radio around the globe. Vox is a 10-year member of 1% For the Planet and has donated songs for causes like the American Asperger’s Association and the Duchenne Foundation.

We at Uke Like The Pros are proud to have Victoria Vox as a guest at our new UkeCon Fest, happening on August 27th in San Diego, California, so we asked her some questions:

Victoria Vox, tell me about your Ukulele story?

I started playing in 2003 after I was given a vintage ukulele from a fellow musician’s collection. In the beginning, I would bring the uke to my shows and play the only 3 songs I knew sandwiched in between my regular set(s) on guitar. People always commented on the uke and how much they loved the sound/songs. So, I wrote more uke-centric originals and learned more songs, and put out my first ukulele album (Victoria Vox and her Jumping Flea) in 2006. With that came an NPR interview, a ukulele sponsorship, and invites to play at ukulele festivals from Paris to New York to San Diego. I continued to play guitar for a few more years, but the ukulele material took over to the point I stopped bringing the guitar at all.

Fast forward 19 years and 11 albums later, my original (ukulele) music has brought me to Australia, New Zealand, 48 states in the U.S. (including Hawaii and Alaska), Scotland, England, France, Italy, and the Czech Republic.

Stylistically, my uke playing has evolved over the years. I started out on high G, then moved to low G, then added a loop pedal, and then an octave pedal. It’s a little bit pop, folk, jazz, and Americana.

How did you get started with music and what lead you to the ukulele?

I’d say that I was a glorified “band-geek” in school. I first took up the violin, then oboe, then trumpet… to eventually figure out that I wanted to primarily sing my songs (I started writing original music when I was 10). So, I picked up the guitar and learned to accompany myself. I went on to study Songwriting at the Berklee College of Music and after graduating, spent a good 6 months busking in the street of London (England), Toulouse (France), and Rome (Italy). When I came back to the states I toured coffeehouses coast to coast and the ukulele was just a welcome addition to the set. My mom gifted me my second ukulele, which allowed me to “go electric” (plug-in). At that point, I had no excuse to start playing the uke at the shows.

I was drawn to the ukulele for its light and hopeful sound. Now, even if I play a moody or somewhat sad song, there still is a layer of hope. I’ve learned to be my own drummer in a way and rhythmically give myself a backbeat, and also found that the uke can easily sound great in all genres of music. It allowed me to easily write all different kinds of songs: Jazz, folk, pop, swing, old-timey, and even rock and funk!

Who are your role models in the Ukulele world?

James Hill, Casey MacGill, and Kimo Hussey all helped me in my playing very early on and I regularly keep in touch with both James and Casey. I met them (between 2006 and 2009) at ukulele festivals where I was also hired to perform and teach. It was impossible to play shoulder to should with these guys and not pick up some “tricks of the trade”!

Some songs can be self-referential, but I also like to write character songs from others’ perspectives. My latest album, Nirvana in REM, uses the art of Fred Stonehouse as an inspirational springboard. Perhaps all songs (ever written) are still about love and money (or sex, drugs, and rock & roll), but there is always an interesting way to spin it!

What 3 tips can you give to people that are starting to learn and improve on the ukulele?

My three tips for budding ukulele players are:

Gosh, in my 19 years of being a full-time performer I’ve learned a lot! My big ah-ha moment takeaways are:

What are you excited about for the UKE-CON Summer Ukulele Festival?

I love ukulele festivals to connect with other artists, players, and uke-lovers! There will be a lot of great entertainment and workshops!

Well, how was your pandemic? I’m looking forward to getting together with people and players in person and making some music!

Tickets are almost sold out! Do you have any words for the attendees (both in person and virtual)?

I’m happy to be a part of this event, and thanks to Terry and the ULTP crew for having me. With so many artists and artists on the line-up, it’s guaranteed to be a good time!

UKE-CON is a great opportunity for people to connect with their ukulele teachers/artists/mentors. What do you like the most about being part of this one-of-a-kind ukulele community?

The “uke-world” is a wonderfully friendly and supportive place and I’m sure everyone performing is approachable and would love to meet the attendees, either online or in person.

A few months ago, I released my latest album, Nirvana in REM, which is an art book with lyrics and music (inspired by the art of Fred Stonehouse). It was a very ambitious project, which I self-produced, recorded, and composed the songs for. The book also contains a QR code to view animated versions of the artwork along with the songs (trippy and very cool, IMO). It was my “pandemic project” and I’m happy to be back out in the world performing my songs!

I’m not sure where my dad heard this quote, but with a little research I see that it’s a variation of a Shakespeare line from “All’s Well That Ends Well”.

“Love many, trust few, paddle your own canoe”.

When I was 17, I got a tattoo in London. I wanted to get a ladybug on my foot, but the tattoo artist wouldn’t do feet. So, I pointed at my left breast as an alternate location. I didn’t care for the “ladybugs” in the book, so I drew my own. It’s still with me to this day… but might be time to either get it touched up or removed. Ha.

On social media, you can mostly find me @victoriavox

I also use Patreon.com/Victoriavox for bonus material and a monthly uke lesson / deep dive (patrons-only).

Awesome!!! We’re really excited to see you at the UKE-CON Festival 2022 in San Diego, California, on August 27th.

UkeCon Fest is happy to welcome: Bernadette Plazola! (AKA, Plazi) 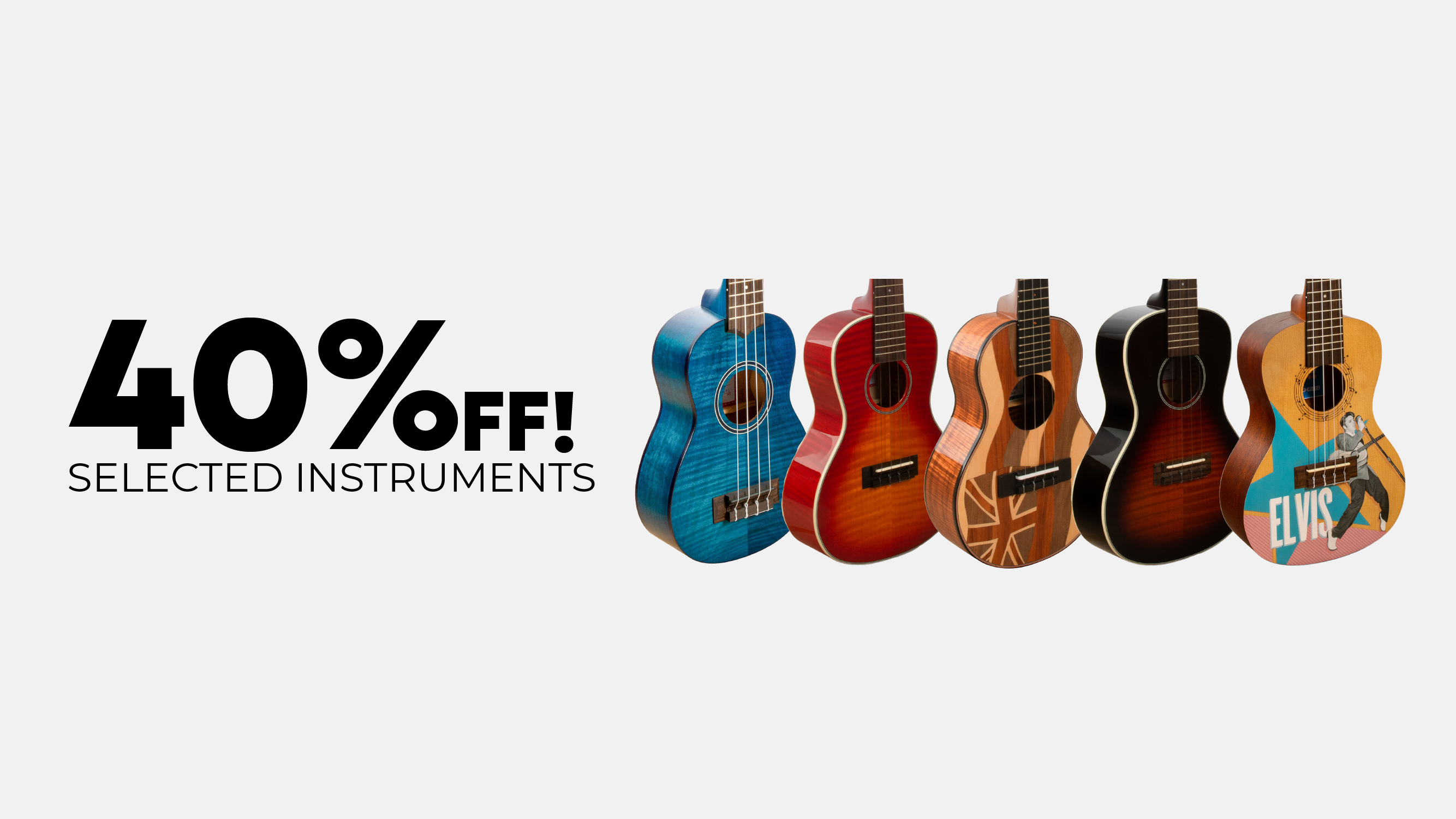 5 Things You Should Know Before You...