Chat with us, powered by LiveChat
Top Posts
How to Play Master of Puppets...
Do Ukulele Skills Transfer to Guitar?
Basic Ukulele Chords Everyone Should Know
Which Ukulele String Is the Thickest?
How Ukulele and Guitar Are Different
Ukulele Keys And How To Understand...
Are Ukulele Strings Metal or Plastic?
Ukulele Jam Sessions!
Is the Ukulele Easier than the...
How to start playing your Ukulele...
Home Ukulele The Top 4 Ukulele Woods
UkuleleUkulele Reviews

Which Ukulele Wood is the Best? 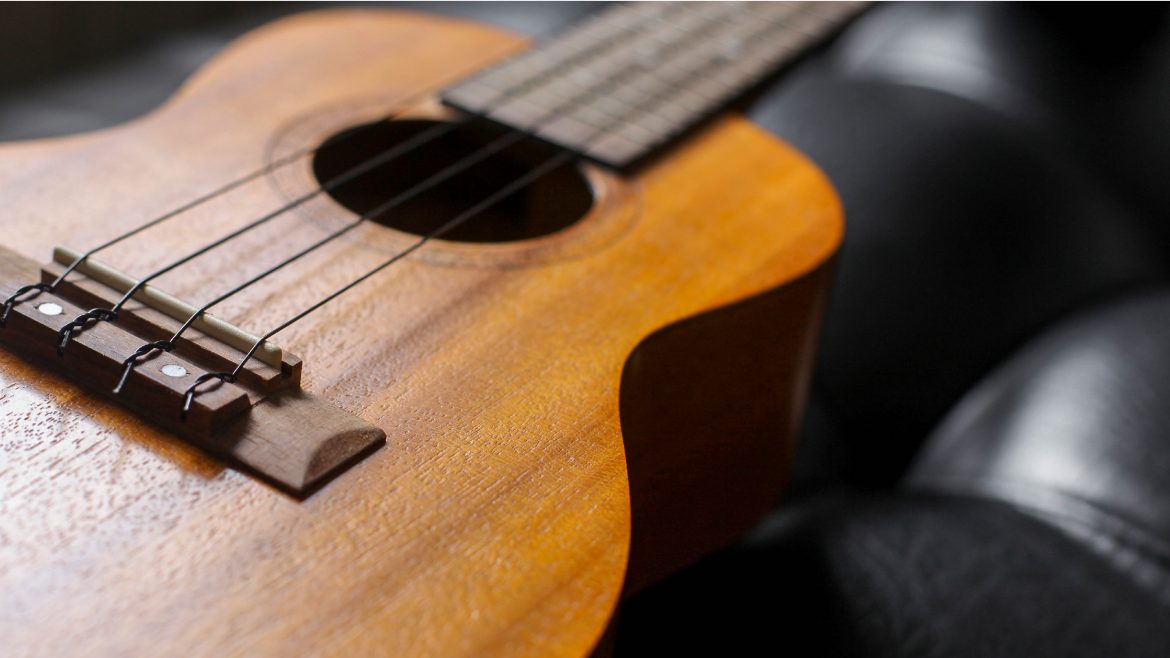 Did you know that there’s a whole world of ukulele woods out there? Ukuleles come in several shapes, sizes, designs and styles. Whether it’s a soprano, tenor or concert uke, there will certainly be some wood involved in the manufacturing process. And, just like with the many different varieties of ukuleles, the wood that they are made from will also come in many different varieties.

There are multiple types of wood that can go into the design and construction of a ukulele, and the type of wood that is used will determine its look, its overall sound, as well as its cost. Some woods are more common while others are more rare, and the hardness or softness of the wood can affect things like the tone, the sustain and the projection when you play.

With that in mind, four of the best ukulele woods are mango, spruce, koa and mahogany, each of which have their own, unique characteristics. And, the sound, the look and what will fit into your budget are all important factors to keep in mind when considering ukuleles that are made from all of these different woods. Cost can definitely be a factor for many people, but it’s also important to recognize that the overall sound that you’re looking for is something that should not be ignored.

Read more: Learn how to play “Creep” on your Ukulele

So, in this article, we will go over these top four woods for ukuleles and break down each of their characteristics to help you determine which ukulele wood is best suited for you. 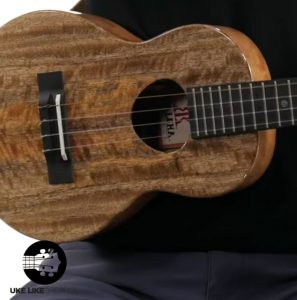 Mango wood is known for its flame-like appearance and warm-sounding tones.

Mango is not one of the more common woods for ukuleles since it is not grown as prevalently as many other woods, making it a little harder to come by, as well as making it a little more pricey. But one of the great things about mango wood is its unique appearance. The colors of mango wood can vary from light to dark, and the natural spalting give it a flame-like appearance in the grain.

Mango wood used to be primarily grown in Southeast Asia in places such as India and Myanmar, but over the years it has been successfully cultivated in other tropical regions, such as Hawaii and Brazil.

As for its sound, mango wood gives ukuleles a warm, full-sounding effect without being overly bright with its tone. It may not make the uke as loud as it would be with some other varieties of woods, but mango’s mid-range tone make it a huge favorite for uke players. 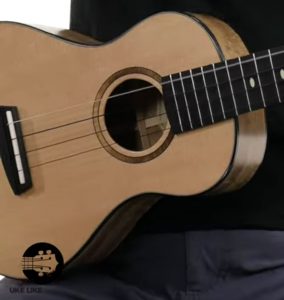 Spruce wood is very solid, giving a ukulele a lot of projection and clarity in its tone.

Spruce is a very common wood that is typically used for the top of a ukulele’s body, with other woods such as mahogany, rosewood or acacia being used for the sides and back of the body. As mentioned, it’s a very common wood that doesn’t have much variation in its appearance, and it may even seem a little plain-looking compared to other ukulele woods.

Approximately one-third of Germany’s forests are grown from spruce trees, and in addition to them being a quicker-growing tree with a high yield of wood, they are also very solid and durable, which makes spruce-top ukuleles all the more favorable.

Despite spruce being a more common wood, it’s a hard, solid wood that sounds great for a uke. Spruce top ukuleles provide a lot of natural projection and volume, as well as giving you a higher level of clarity with its tone. 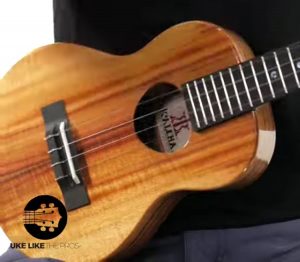 Koa is a very sought-after wood for ukes because of its rareness and warmer tones.

Koa is another very unique wood since it is only grown in Hawaii and in relatively small quantities. In addition to its rareness, it also has a very unique appearance with many variations in its color patterns and spalting, giving ukes made from koa an almost one-of-a-kind quality. Also, due its rarity, ukuleles made from koa tend to be more expensive compared to ukes made from other types of wood.

The wood from the koa tree has been utilized by Hawaiians for centuries because of its strength, versatility and durability. And, since it can only be grown in Hawaii, it makes this wood all the more unique and special.

As for its sound, koa offers a warmer tone that is somewhere between mid-range and high, providing moderate projection and good sustain. In the ukulele world, koa-made ukes are often considered to be the quintessential Hawaiian ukulele. 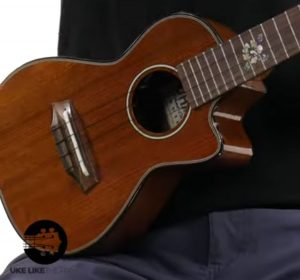 Mahogany wood is durable and affordable, along with providing good tonal clarity.

Mahogany is one of the most cost-effective woods for ukuleles since it’s commonly grown in many parts of the world in large quantities, and it’s also a very consistent-looking wood with little variation in its appearance. However, its affordability doesn’t mean that it’s a cheap wood by any means. Mahogany is a strong, hard wood, and most ukulele necks are made from mahogany due its strength and durability.

Its origins were initially from Central and South America, but mahogany trees have been successfully grown on several continents over the years where there is a heavier amount of rainfall and humidity.

There’s a lot to take into consideration when you’re looking to buy a ukulele, and the materials that they are made from are no exception. Whether you’re a live performer, a studio musician or simply playing at home, the type of wood that goes into a uke’s construction is an essential factor.

Also, your style of playing is another important thing to consider. The type of wood that goes into your uke will definitely have an impact on your overall sound depending on whether you are strumming, picking, plucking, if you want to play loudly or quietly, or all of the above. So, be sure keep that in mind as well. 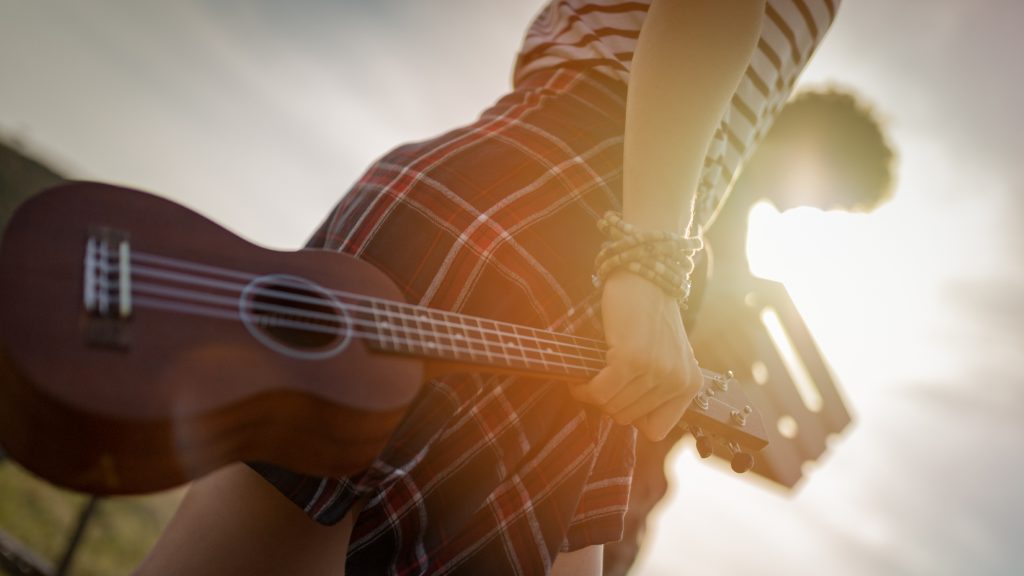 Above all, the more you know about the various woods that ukuleles are made from, the easier it will be for you to find a ukulele that suits your needs, fits into your budget, and ultimately makes your playing experience the most enjoyable that it can be.

How to Play the F7 Chord on Your Ukulele

Chord Melody: What is it and how to master it on your Ukulele

How to Hold an Ukulele