Chat with us, powered by LiveChat
Top Posts
Basic Ukulele Chords Everyone Should Know
Which Ukulele String Is the Thickest?
How Ukulele and Guitar Are Different
Ukulele Keys And How To Understand...
Are Ukulele Strings Metal or Plastic?
Ukulele Jam Sessions!
Is the Ukulele Easier than the...
How to start playing your Ukulele...
10 Ukulele Icons You Should Know...
The Ukulele is Easy to Learn!
Home Articles The Passing of Ukulele Ray
Articles

The Passing of Ukulele Ray

I am very saddened upon hearing the news that Ukulele Ray has passed.

At the time I had never heard of Ukulele Ray, but based on his posts I could tell he was quite a character. We communicated back and forth, but were unable to get together.

A month later I got another message from him, inviting to come jam with him at a gig he had somewhere in San Diego. It sounded fun, but I was out of town and unable to make it.

Through social media, I was starting to get more familiar with Ukulele Ray. He liked every one of my posts and his photos showed up on my Instagram feed every day. 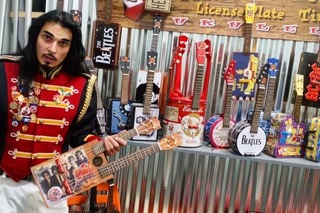 Around December 2017, he again invited me to come and jam with him at his studio. Again, it was something that interested me, but it just didn’t work out.

In January 2018, I was at the NAMM show in Anaheim, CA visiting with the guys at KoAloha and guess what? I looked a few booths down the aisle and there stood Ukulele Ray. He was very tall, probably around 6’4′ and hard to miss with his long black hair, red Beatles Sgt. Peppers coat, and a bigger than life personality.

I strolled down and introduced myself. He recognized me right away, but the funny thing was, he didn’t know my name he just knew me as Uke Like The Pros.

As he was setting up to play we talked for a bit. He showed me some of the swag that he had at his booth including some neon yellow banjuleles he was selling, the original Fender ukulele that he helped design (you know the ukulele that Fender sells that has a headstock like a Telecaster), and his ukulele book “Ukulele for Guitar Players” that he published with Hal Leonard. We hung out for a half an hour and again agreed to get together.

Then one night in early march while I was staying at an Airbnb in Los Angeles when I got a private message from Ukulele Ray. He said he needed to ask me something. Although the conversation went back and forth for a while, he asked me if I would join his band. His lead ukulele player was leaving and he wanted me take over.

Although my schedule is fairly packed and it’s hard to make big time commitments, it sounded like fun and I wanted to start gigging more. So I agreed and again we talked about getting together to jam and better get to know one another.

So finally, on Monday March 12th, on my way back from class I stopped by Ukulele Ray’s house. He led me into his ukulele museum and I was completely blown away.

He had converted a granny flat apartment (that I think use to be a garage) into a shrine for ukuleles. Every single inch was covered by ukuleles. There were easily 300 ukuleles hanging on the walls, leaning up against the walls, and set up on stands. I’m serious when I say every inch of the place was covered with ukuleles.

He had every kind of ukulele you can imagine. Old ones, new ones, funny shaped ones, home-made ones, toy ones, plastic ones, red ones, painted ones, Beatles ones, double neck ones, electric ones, lunch box ones, cigar box ones, Campbell’s Soup ones, and even a ukulele he got from his grandpa.

Besides ukuleles he had all sorts of ukulele memorabilia and instruments that included a suitcase drum set he created. He figured out how to get an entire drum set to fit in an old suitcase that could be taken to a gig, unpacked, and played. Pretty cool.

I was breath taken and ask him if he would go through every instrument of the room and help me comprehend what I was looking at.

So, we took the next hour or so and he showed me and described each instrument and piece of memorabilia in the room.

By the way, Ukulele Ray also did hundreds of impressions, so every few minutes he would start talking like George Harrison or Barney Fife.

After the tour, we started to jam a bit and see how we gelled together. We played a few Neil Diamond songs “Sweet Caroline” and “I’m a Believer”, “Folsom Prison Blues” by Johnny Cash, and “Sittin’ On The Dock Of The Bay” by Otis Redding. I played my KoAloha tenor and he played with really old Martin soprano. We actually had a nice chemistry as he sang and strummed chords, while I did some lead lines and sang backup.

I also got to meet Olivia, his lovely girlfriend.

But what touched me more than anything was his story. Although he had this larger than life personality, with costumes, and impressions, I was interested in the true person under the Ukulele Ray persona.

He told me the story of when he got cancer and was in the hospital for a year. His health got so bad that he was taken to hospice and given only a few hours to live. Somehow by the grace of God he found the strength and courage to fight and live.

He miraculously overcame his sickness and began the road to recovery. He claims that it was his ukulele, that never left his side, was the thing that saved him.

After this I knew that no matter how Ukulele Ray portrays himself on social media or to the public, that he was a kind soul and a true inspiration.

We decided that we would do a gig together on Saturday April 14th and continue to build our relationship.

As he walked me to my car he gave me a hug and said “I love you.” It was strange because people say they love people all the time but, I felt that Ukulele Ray was being sincere.

Come Thursday April 5th we scheduled a rehearsal for Monday April 9th (today) to prepare for our gig on Saturday April 14th. Little did I know this would be the last time I spoke to Ukulele Ray.

This tragic news has taken the breath out of me, like a blow to the stomach. It reminds me, and I feel like I just said this a few months ago in an email to you, that life is short, life is precious, we have to treat people kindly, and we have to make a positive difference in as many lives as we can.

I have some selfish thoughts about wishing I would have gotten together more with Ukulele Ray and develop our relationship. But, I am honored to have been able to share the limited time I had with him and I truly pray that he rests in peace.

If you are interested there is a Go Fund Me page set up for Ukulele Ray to help his family with the cost of the funeral.

Thank you for letting me get some feelings out and please say a prayer for Ukulele Ray and his family.