Chat with us, powered by LiveChat
Top Posts
How to Play Master of Puppets...
Do Ukulele Skills Transfer to Guitar?
Basic Ukulele Chords Everyone Should Know
Which Ukulele String Is the Thickest?
How Ukulele and Guitar Are Different
Ukulele Keys And How To Understand...
Are Ukulele Strings Metal or Plastic?
Ukulele Jam Sessions!
Is the Ukulele Easier than the...
How to start playing your Ukulele...
Home Terry's Corner The Night That Changed It All
Terry's Corner 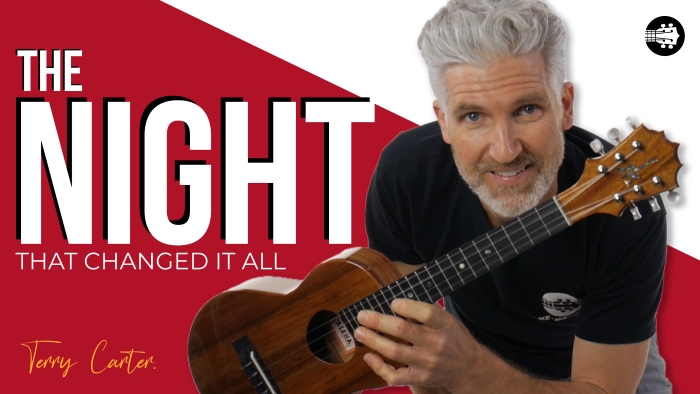 If you can imagine, I was once a freshman in high school. I was young for a high school freshman as most kids my age were still in middle school. My mom put me in school a year early so she could get back to work.

As you know I was playing guitar at the time, but I was shy about my playing, and, honestly, I thought I was much better than I was. All my friends knew I played guitar, but let’s say I didn’t really volunteer to play for anyone.

It was the summer after freshman year and my best friend, Jason Withrow, told me that he was picking me up and we were going to a party with his sister. You have to understand this was a big deal: Jason’s sister Heather was already out of high school and her and her friends were the coolest of the cool.

Although Jason and I were in the same grade, he was older than me and got his driver’s license that summer. His first car was a baby blue Chevy S-10 pickup truck, and you could always hear him when he was coming down the street. Even though his truck was small, he had two 15” speakers wedged behind the bucket seat, and he was always “bumping” the latest and greatest rap song of the day. You not only heard Jason coming down the street, but you could feel him as well.

The night of the party, he pulled in front of my house. He probably honked the horn, as there were no cells phones in 1988, and off we went. I was a confident kid and didn’t have a problem hanging with older kids, but I was a little nervous going to this party and hanging with the “cool” kids. The party was just a couple blocks from my house, and little did I know I would experience something at the party that would inspire my guitar journey forever.

Jason and I walked into the party, which was filled with 20 people, all 4-5 years older than us, and they were talking, laughing, drinking, and having a great time. At this point in my life I may have had a sip of beer once or twice but that was about it. I was just happy to be there.

As the night progressed, we were having a good time, just hanging out and listening to the stories and conversations going on. I remember Heather was dating a guy named Dayton. Dayton was a super cool guy; a blond hair surfer beach-bum that always had a story to tell and was the life of the party.

We were all in the kitchen and two things happened. The first was my first and last experience with Southern Comfort. I just had a shot or two, but I remember I felt it the next day and vowed to never drink Southern Comfort again, a promise I have upheld to this day. The second thing was two of Dayton’s friends grabbed their acoustic guitars, jumped up on the kitchen counter, and started playing. Not just playing, but jamming.

They started playing and singing everything that I loved from The Eagles, Led Zeppelin, Van Halen, Neil Young and The Rolling Stones. The party went wild and everyone began singing and dancing to the music.

I don’t know if it was the Southern Comfort, or my inner passion for music and love for the guitar, but I was I was mesmerized by what I saw and heard. It was beyond cool that these guys knew all these incredible songs, but it was the crowd that really got me. The way that music, and a couple of guys playing guitar, could bring life and happiness to a group of people blew me away.

This passion and goal have always stayed with me. About ten years ago I was sitting at a party, and someone handed me a guitar. I proceeded to play and sing for all the people that were there. My mind flashed back to 1988, and I realized that one night changed my life forever and I was doing exactly what I set out to do.

Enjoying my opportunity to learn ukulele with you a great deal. Though I’ve not been at it a month, and only 2 weeks in the prooI feel progress is mine. Keep up the joy!

That’s 2 weeks in your program lol.

Yeah, man! The passion, the wonder, the longing, the mystery…and, you did it! What’s better than THAT! AND, you turned your own fantasy into a pursuit of excellence and then a mission to help others! That’s what it’s all about. Great story!

The same thing happened to me,but i fell off the kitchen counter and did myself no good at all and broke my 12 string.Terry how about teaching me the Bob Dylan Karina Karina,i can play it on the 12 string but trying to play it on the uke ,impossible.
Have a good day and look after yourselves
Brian

Howdy! I could have sworn I’ve been to this web site before but after browsing
through a few of the articles I realized it’s new
to me. Nonetheless, I’m certainly happy I stumbled upon it and I’ll be book-marking it and checking back
regularly!

Awesome blog! Is your theme custom made or did you download itfrom somewhere? A theme like yours with a few simple adjustements would really make myblog stand out. Please let me know where you got your theme.Many thanks

Fantastic goods from you, man. I’ve understand your stuff previous to and you’re just
extremely wonderful. I actually like what you’ve acquired
here, really like what you are saying and the way in which you say it.
You make it entertaining and you still take care of to keep it sensible.
I cant wait to read far more from you. This is actually a terrific
web site.

Awesome! Its in fact awesome article, I have got much clear idea concerning from this article.

Hi there colleagues, good paragraph and nice urging commented at this place, I am truly enjoying
by these.

I do accept as true with all the concepts you’ve introduced in your post. They’re very convincing and will certainly work. Still, the posts are very short for newbies. May just you please lengthen them a little from next time? Thanks for the post.

You have brought up a very good details , appreciate it for the post.

Simply wanna say that this is very helpful , Thanks for taking your time to write this.