Chat with us, powered by LiveChat
Top Posts
How to Play Master of Puppets...
Do Ukulele Skills Transfer to Guitar?
Basic Ukulele Chords Everyone Should Know
Which Ukulele String Is the Thickest?
How Ukulele and Guitar Are Different
Ukulele Keys And How To Understand...
Are Ukulele Strings Metal or Plastic?
Ukulele Jam Sessions!
Is the Ukulele Easier than the...
How to start playing your Ukulele...
Home Songs The Lion Sleeps Tonight, the Ultimate Tutorial for Ukulele
SongsUkulele

The Lion Sleeps Tonight, the Ultimate Tutorial for Ukulele

Your chance to learn the chords, rhythms and a pretty cool history behind the song 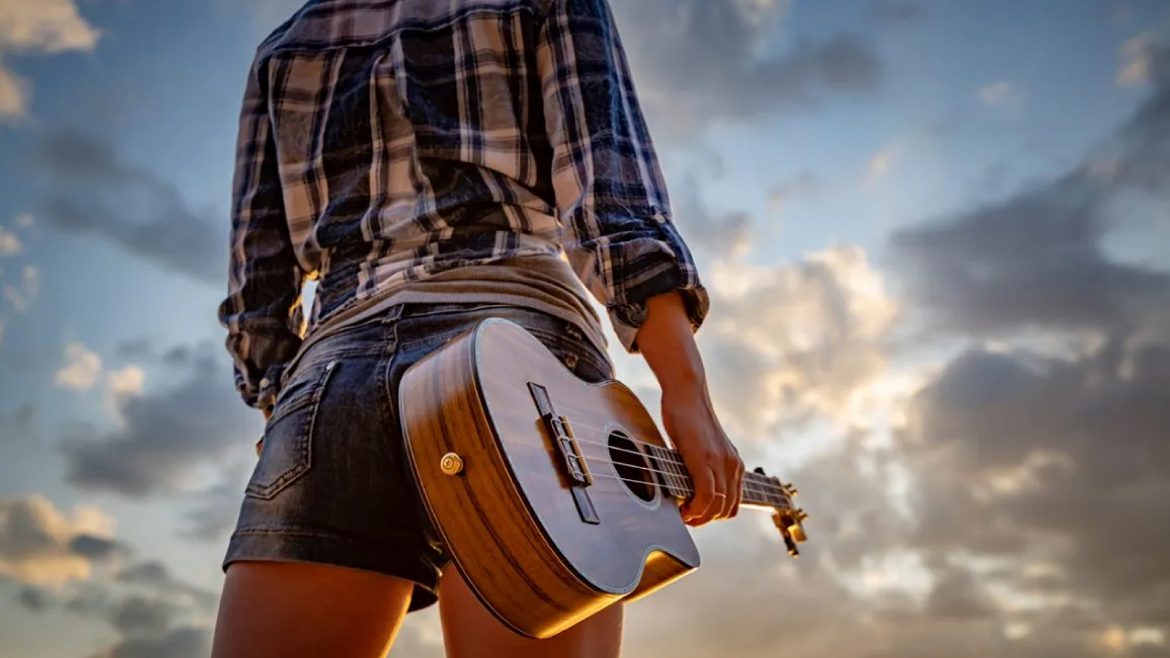 If you were looking for an easy and fun song to play on your ukulele, and you’re also a beginner ukulele player, then STOP the search! You’ve just found the perfect place for you to not only learn how to play this –so called– “Disney” song, “The Lion Sleeps Tonight” on your ukulele, but you’re also going to learn some interesting facts about this song that will blow your mind, so… Let’s begin!

The history behind The Lion Sleeps Tonight

Turns out that this song was created back in 1939 by Solomon Linda, a South African musician, singer and composer,  who wrote this song in Zulu under the title “Mbube” (“lion” in zulu) without knowing the huge impact this song would have in the record charts all around the world.

After the release of “Mbube”, or “The Lion Sleeps Tonight (english version), the song became part of the popular culture thanks to the long list of artists who decided to cover the song as part of their own list of songs, until The Tokens –an American male vocal group from Brooklin, New York– arrived with their own version of The Lion Sleeps tonight back in 1961. The Tokens’s version of the Lion Sleeps Tonight blowed the charts and reached the No. 1 chart position in USA.

Read more: How to Play LAVA on your ukulele

33 years later, the song reached the fame again thanks to Walt Disney Pictures after the release of its 32nd animated film called “The Lion King” (1994). Although The Lion Sleeps Tonight is not the main theme for the movie, it does appear when 2 of the most famous characters of the movie, Timon and Pumbaa. This appearance led to disputes between Disney and Solomon Linda’s family that ended in in 2006 with a legal settlement between the two parts for an undisclosed amount of money.

Disney also released a new version photorealistic computer-animated remake of The Lion King in 2019 where they used an even longer version of the song:

After knowing all the facts about this song, it’s now time for us to learn how to play and sing this song with our ukuleles!

To play The Lion Sleeps Tonight on your ukulele you’’ll only need 3 chords: C – F – G7. For the strum pattern or rhythm, you can use either the island strum (D-DU-UDU) or these 2 rhythms I’ll show you in the image below: 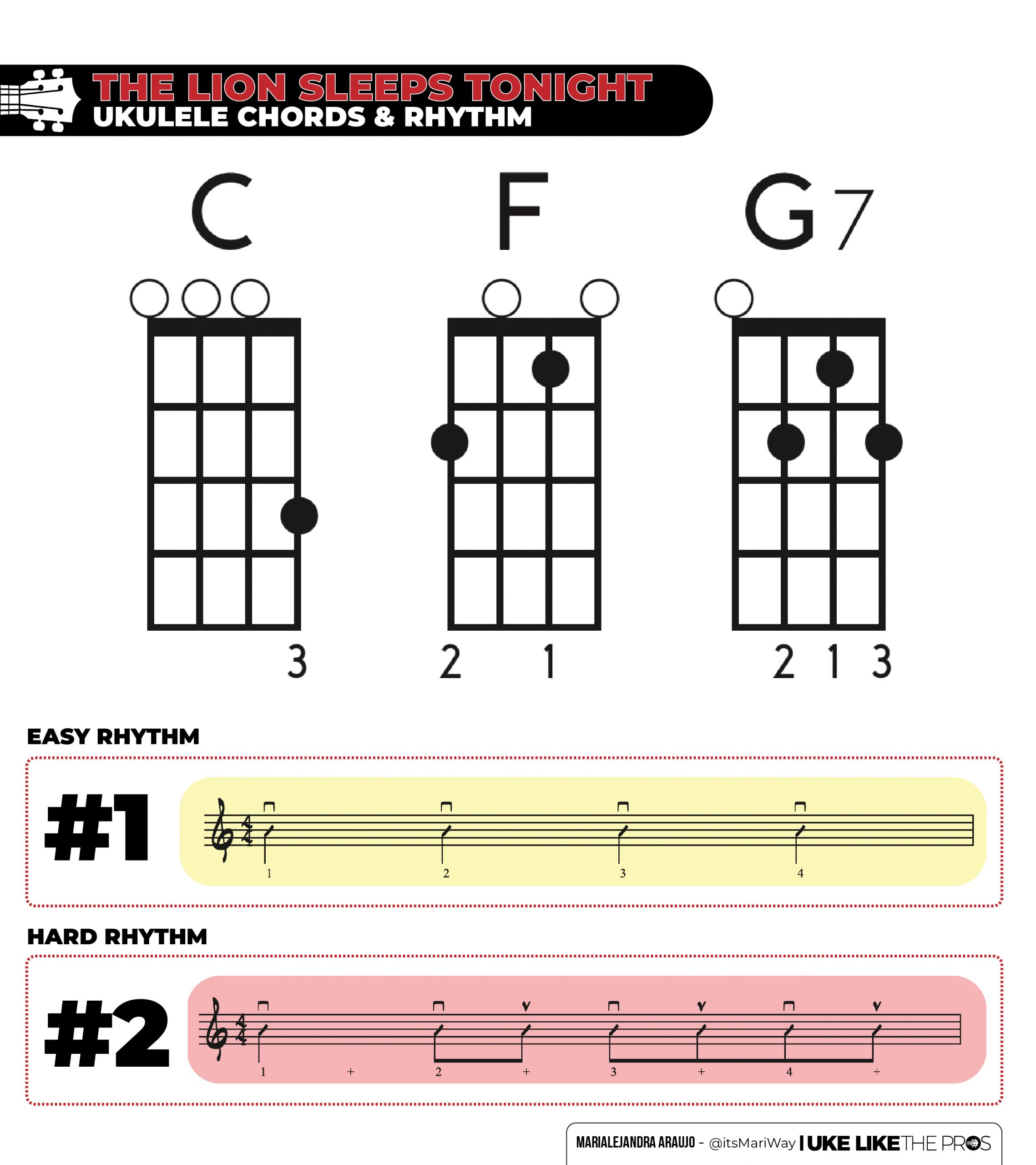 As the image shows, we’re giving you two different rhythms that you can use, depending on your ukulele level. If you’re a total beginner, you can just play quarter notes for the entire song (rhythm #1 of the image), changing chords when needed. If you think you can go for it, you can also try the hard rhythm for the song, which mixes one quarter note with 6th notes, emulating the sound of the “Aweem away” part of The Lion Sleeps Tonight (rhythm #2).

To master this song, you can sing the intro a cappella and then jump to the “Aweem away” chorus that goes fro C to F to C to G7 for two times. Don’t worry, you’ll see the lyrics of the song right below this text so you can play and sing along with it.

Terry Carter, from Uke Like The Pros, recorded a LIVE session about this song as a part of the current Beginner Ukulele Song Challenge, that goes along with the release of our brand new Ukulele Kids Course Songbook, where you can learn more than 10 classic children songs using an ukulele tuning that’s easier for kids or the very beginner player. Remember, you can either get lifetime access to that course or simply get one of our memberships to get access not only to this course, but to all of our wide variety of ukulele, baritone ukulele, guitarlele and even guitar courses we have at ukelikethepros.com and rocklikethepros.com.

Sing along with us!

How did you do? Leave a comment below if you liked this song and if you want to learn more songs like this one. Remember, to master this and every other song, the key is REPETITION. Repeat the chord changes over and over again until you play them in the most smoother way possible; then, add the lyrics and practice the complete song until you think it sounds best.

If you want the song sheet Terry used for this song and the awesome backing track for it, you can get it with the VIP access for the Beginner Ukulele Challenge. You still have time to get it!

Good luck with this song, and let’s keep it rocking!

How to Play the Cm7 Chord on Your Ukulele

How to Play the Bm Chord on your Ukulele

Love this song! I just played it early today for a special needs client. It is interesting to hear about the history.

Wow, and how did it sound?? That’s amazing 🙂
I’m glad you liked the history behind it! I’ll try my best to always give you all more than expected. <3

Very interesting history, I had no idea! I enjoyed playing this song ?! Any chance for a Disney challenge in the ULTP future ?!?

Hey Jackie! It really was an interesting history!
A Disney Challenge? We’ll, I can talk to Terry about this!
In the meantime, in our Youtube Channel we have some Disney songs for you to play, including another one from The Lion King 😉

I’m glad you liked it, Nancy!
It’s always nice to learn something new besides the thing that we’re already trying to learn.. haha

How to Play the Bm Chord on...