Chat with us, powered by LiveChat
Top Posts
How to Play Master of Puppets...
Do Ukulele Skills Transfer to Guitar?
Basic Ukulele Chords Everyone Should Know
Which Ukulele String Is the Thickest?
How Ukulele and Guitar Are Different
Ukulele Keys And How To Understand...
Are Ukulele Strings Metal or Plastic?
Ukulele Jam Sessions!
Is the Ukulele Easier than the...
How to start playing your Ukulele...
Home Ukulele The Left-Handed Ukulele Buying Guide
UkuleleUkulele Reviews

There are a lot more options than you think!!! 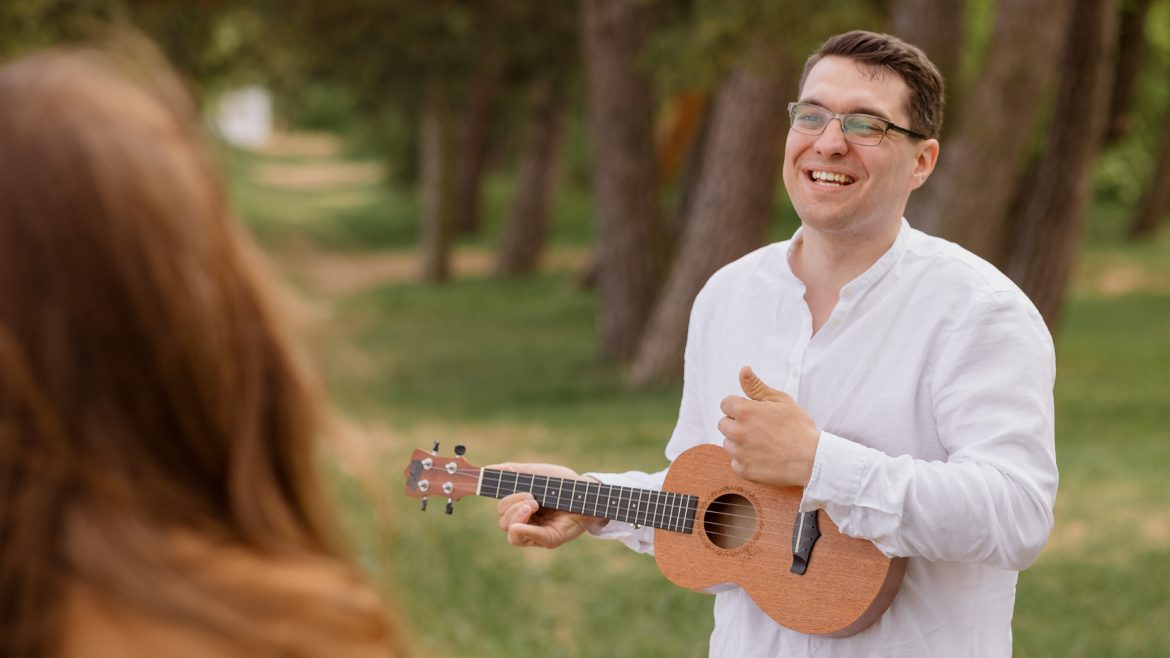 Whether you are a beginner or a more experienced player, you probably already know that ukuleles designed and made for left-handed players can be a little harder to come by. It’s not as if left-handed uke players are an extremely rare breed, but there is a significantly larger number of right-handed players, making the options for lefties seem a bit more limited.

Much of these limitations are because many ukulele makers don’t feel that there are enough lefties out there to make it cost-effective and lucrative enough to accommodate that market. However, another factor (and a big silver lining) is that most ukes that are initially designed and made for righties can easily be converted into ones for lefties.

So, in this article, we’ll go through the basics of how to flip a right-handed ukulele into a left-handed one, what to look for and what to avoid as far as converting a ukulele from a righty to a lefty, along with giving some recommendations for ukes that are already designed for left-handed players.

The majority of ukuleles on the market are made and set-up with right-handed players in mind, mostly because righties make up a much larger demographic of uke players. However, by simply rotating the ukulele 180 degrees and putting the strings on in the opposite order, you can have a left-handed uke in a short amount of time, often at little or no expense.

Just keep in mind that some ukes might need some adjustments to the nut and saddle to accommodate the thickness and tension of the strings. But these adjustments, if needed, are often things that can be pretty easy to do on your own, or at least not too expensive to have done by a professional. 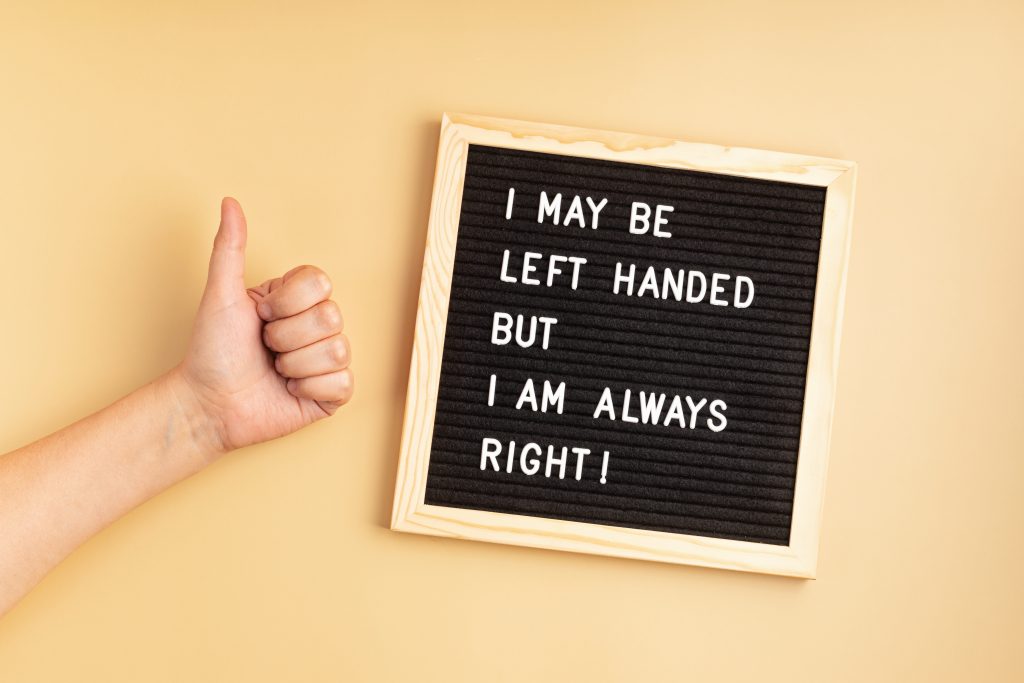 Try To Avoid Converting A Ukulele Specifically Made For Righties

As mentioned, most ukuleles are made with right-handed players in mind, but they can also be modified for a left-handed player without too much trouble. But do your best to avoid trying to convert a uke with a cutaway design, a compensated saddle or an active pickup.

A cutaway design is where the lower part of the body is literally cut away from where it would normally join the neck, making it easier to get your fingers higher up on the fretboard. With that in mind, if you try to convert a right-handed cutaway ukulele into a left-handed uke, the cutaway will now be on the top half of the body, basically making it a useless feature. So, it’s a good idea to steer clear of trying to flip a cutaway ukulele and instead get one with a standard, symmetrical body. 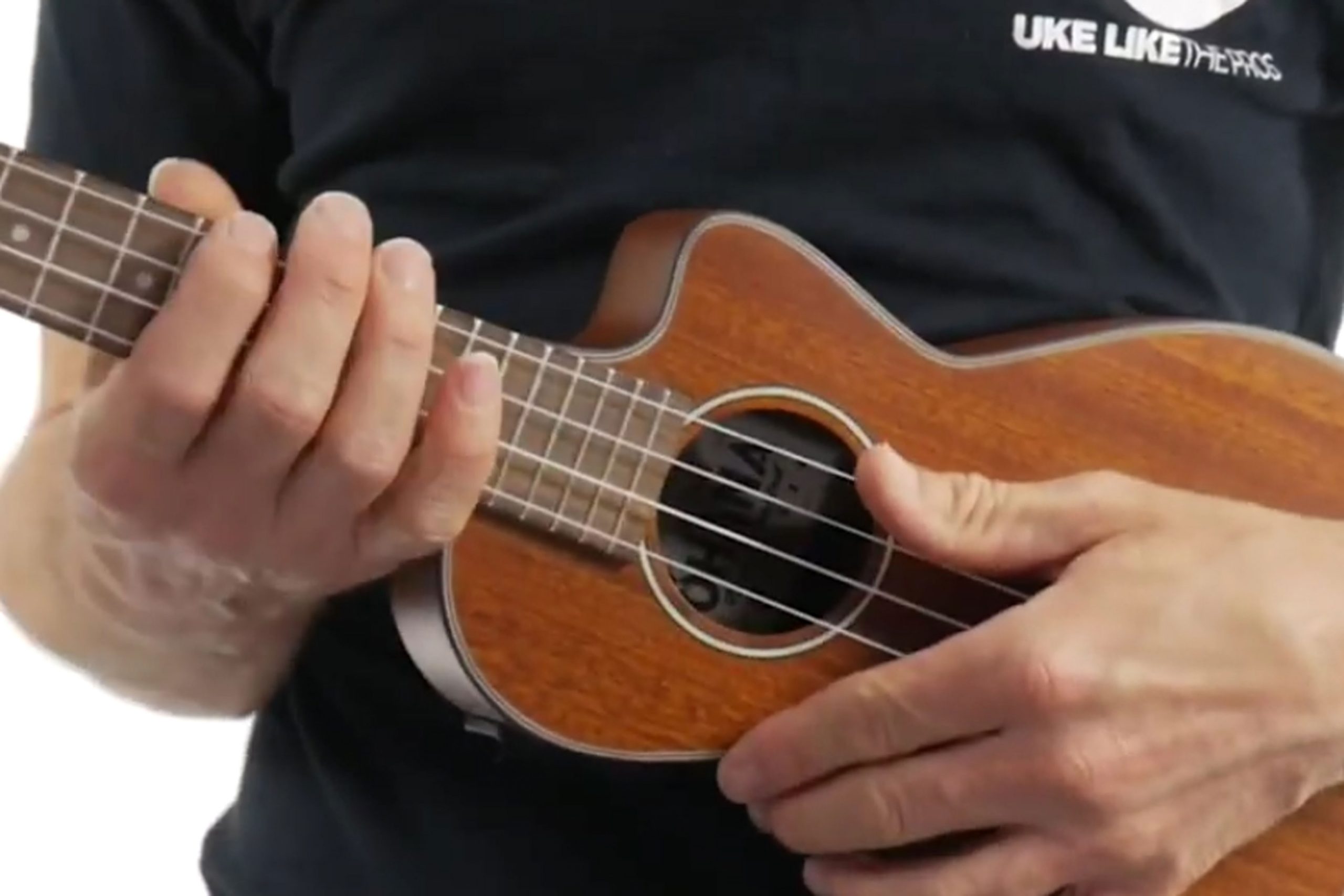 A cutaway design isn’t typically a great choice when flipping a uke for lefties. 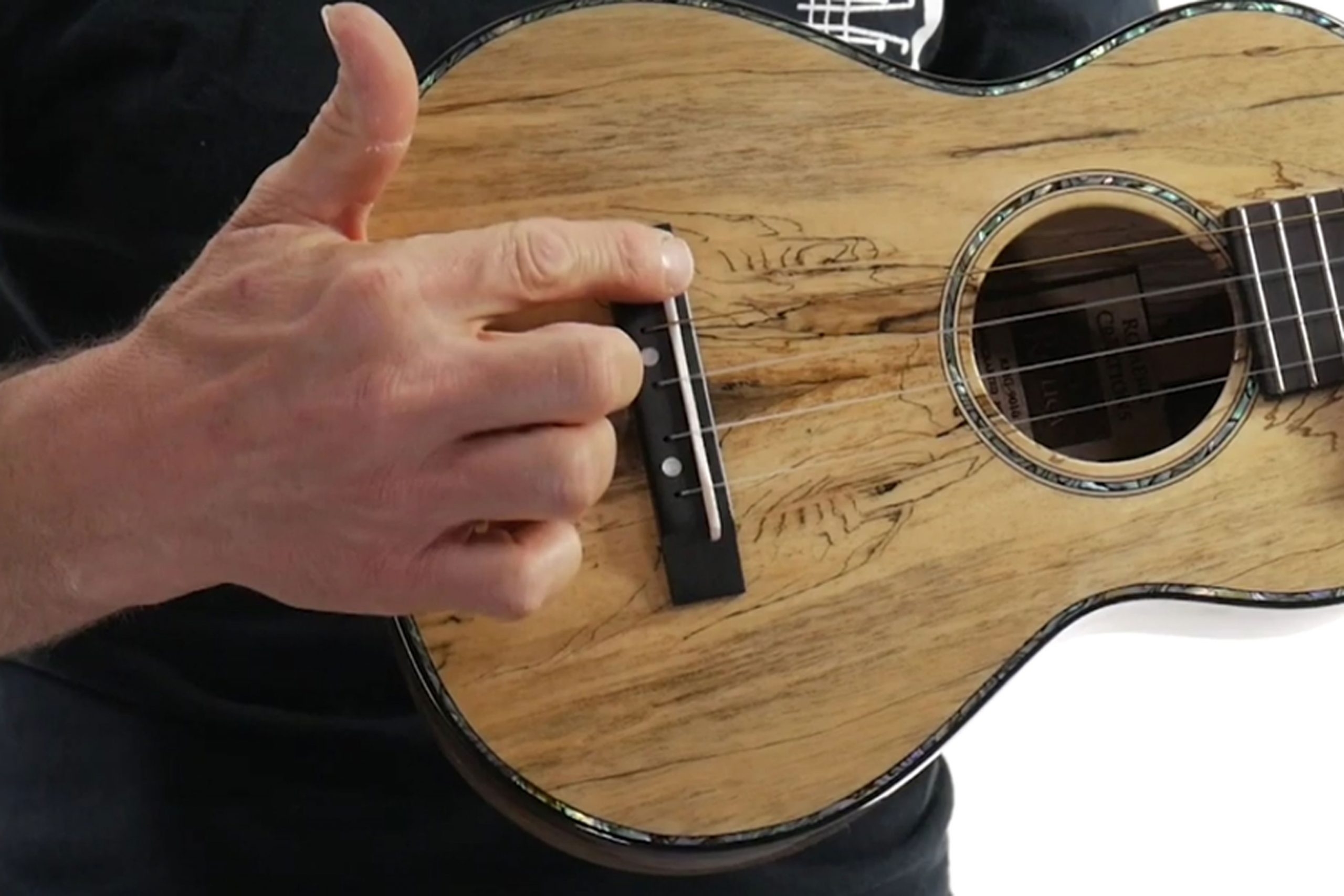 Compensated saddles made for right-handed ukuleles can complicate a conversion.

If you are looking to get a right-handed ukulele with a pickup and then convert it to a left-handed uke, be mindful about any adjustable controls such as for volume and tone. Some ukuleles simply have a plug-in-and-play style, where you can’t make any volume or tone adjustments. But if it does come with controls, they will typically be on the top of the uke facing upward. So, if you buy a uke that is designed this way and then try to flip it, the controls would now be on the bottom of the body facing the floor, making it very difficult and awkward to make adjustments while you are playing.

Read more: How to play the Db chord on your Ukulele

The overall look of a ukulele is another thing to definitely consider if you’re trying to convert one. Even if you’re trying to flip a uke with a standard design and symmetrical body, there are many ukes that have either a natural grain or appearance in the materials, or it could have artwork or other design elements that look great for right-handed players, but may not look as appealing once converted for a left-handed player. Appearance and aesthetics are subjective and certainly in the eye of the beholder, but this should not be overlooked when selecting a ukulele to convert. 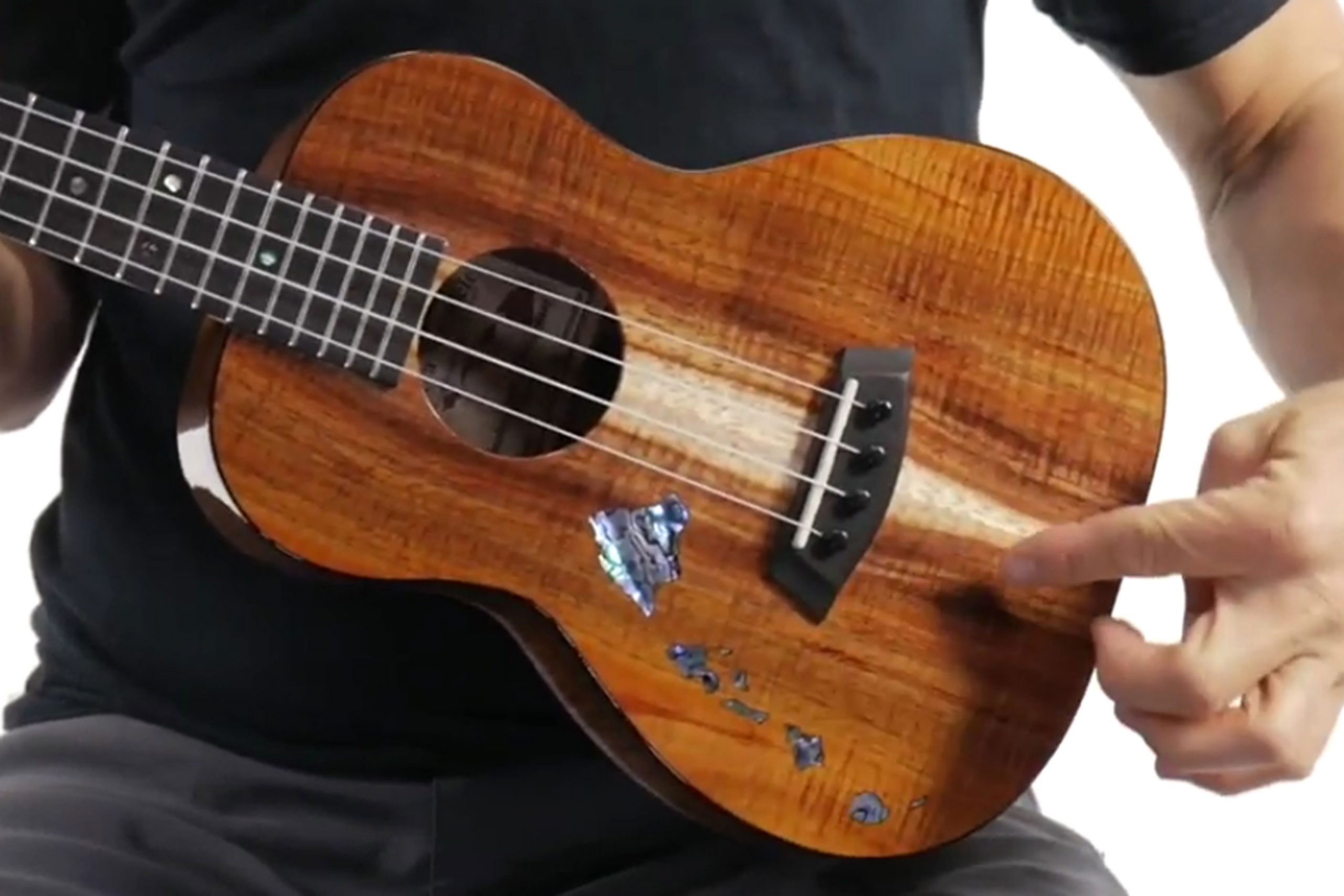 Be mindful of the overall appearance before you decide to make a uke left-handed.

Even though most ukuleles are designed for right-handed players, which make ukes for lefties a little harder to come by, there are still some great options available if you don’t want to buy a right-handed uke and deal with the conversion. So, here are some top picks available that are specifically made for lefties.

This concert ukulele is made from solid mahogany with a gloss finish and a rosette soundhole. It has a built-in pickup for playing through an amplifier or P.A. system, along with a cutaway design for more ease when hitting notes higher up on the fretboard. 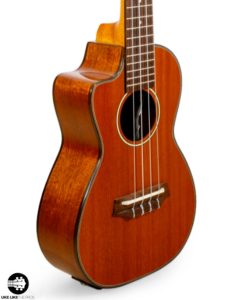 Kala’s super tenor has a standard design but has been set-up for left-handed players. It has a solid mahogany body with a striped ebony fingerboard, flame maple binding and a satin finish. Also, this uke comes pre-strung with D’Addario clear nylon strings. 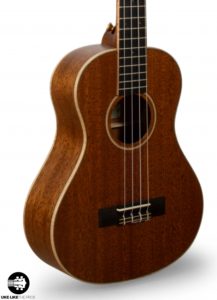 This tenor ukulele has a gloss finish over solid mahogany wood, along with a black and white rosette soundhole, and black and white binding. It also has a pickup with EQ and tuning options, as well as a cutaway design for more ease reaching higher notes. 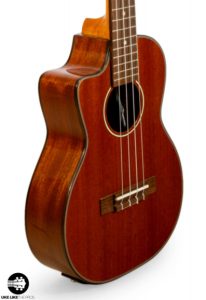 Ohana’s left-handed baritone uke has a hardwood fretboard and a mahogany body with a gloss finish. It’s made with a cutaway design, contains a pickup with EQ and tuning functions, as well as having a black and white rosette soundhole. 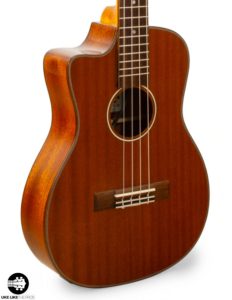 As mentioned, there may not be a ton of ukuleles designed specifically for left-handed players, but that doesn’t mean that it’s especially challenging to either find one, or convert a right-handed uke into left-handed one. If you simply remember a few, important factors when you’re looking to buy and convert one, you’ll have a much more enjoyable playing experience now and in the long run.

Also, the Uke Like The Pros online store has several ukuleles available that we can set-up for you if you are a left-handed player, which can help take the strain off of your shopping.

And, be sure to check out our collection of online lessons, books and accessories for all your ukulele needs.

How to Play the Db Chord on the Ukulele

Ukulele strings order and how to correctly tune them