Chat with us, powered by LiveChat
Top Posts
How to Play Master of Puppets...
Do Ukulele Skills Transfer to Guitar?
Basic Ukulele Chords Everyone Should Know
Which Ukulele String Is the Thickest?
How Ukulele and Guitar Are Different
Ukulele Keys And How To Understand...
Are Ukulele Strings Metal or Plastic?
Ukulele Jam Sessions!
Is the Ukulele Easier than the...
How to start playing your Ukulele...
Home Chord Mania Jazz Ukulele ii – V – I Chord Progression A Major
Chord ManiaUkulele 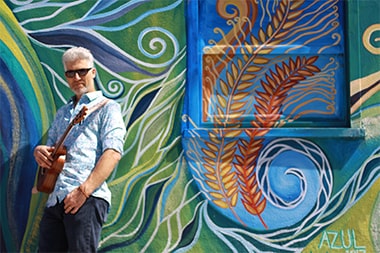 Hi! This tutorial is especially for Jazz fans1 I will teach you how to play ii – V – I chord progression in the key of A Major.

‘ii’ refers to B Minor which is the second chord in the A Major Scale. In this tutorial, we will be using the 7th chords, so it will be B Minor 7th chord.

Use your triads when you play pop and rock music! But as far as Jazz is concerned it will be the 7th chords!

‘V’ refers to the fifth chord in the A Major Scale- which is E. As we are using the 7th chords it will be the E7 chord. But I am using the E 13 chord in this tutorial.

The E13 chord will make your music “cooler” because it has some extra chords for that effect!

‘I’ refers to the first chord of A Major Scale which is A Major. We will be playing the chord A Major 7.

Playing Jazz music on the Ukulele differs from pop because unlike pop in which mostly strumming is used, chord hits or comping is used.

The comping style I use is playing a quarter note on beat 1, rest on beat 2, and the eighth note is tied to half note on the “+” of beat 2.

This is basically a 4 bar chord progression with:

Measure 1 with B Minor chord

Practice these chords and once you get comfortable try variations to Jazz it up in your style!

For the authentic Jazz touch, don’t just use one finger for comping use all fingerstyle!

Don’t restrict yourself! Music has no boundaries! Experiment and try different variations to fulfill your passion for Jazz music!

Click on https://www.ukelikethepros.com for online tutorials to play the Ukulele.