Chat with us, powered by LiveChat
Top Posts
Basic Ukulele Chords Everyone Should Know
Which Ukulele String Is the Thickest?
How Ukulele and Guitar Are Different
Ukulele Keys And How To Understand...
Are Ukulele Strings Metal or Plastic?
Ukulele Jam Sessions!
Is the Ukulele Easier than the...
How to start playing your Ukulele...
10 Ukulele Icons You Should Know...
The Ukulele is Easy to Learn!
Home guitar How Ukulele and Guitar Are Different
guitarUkulele 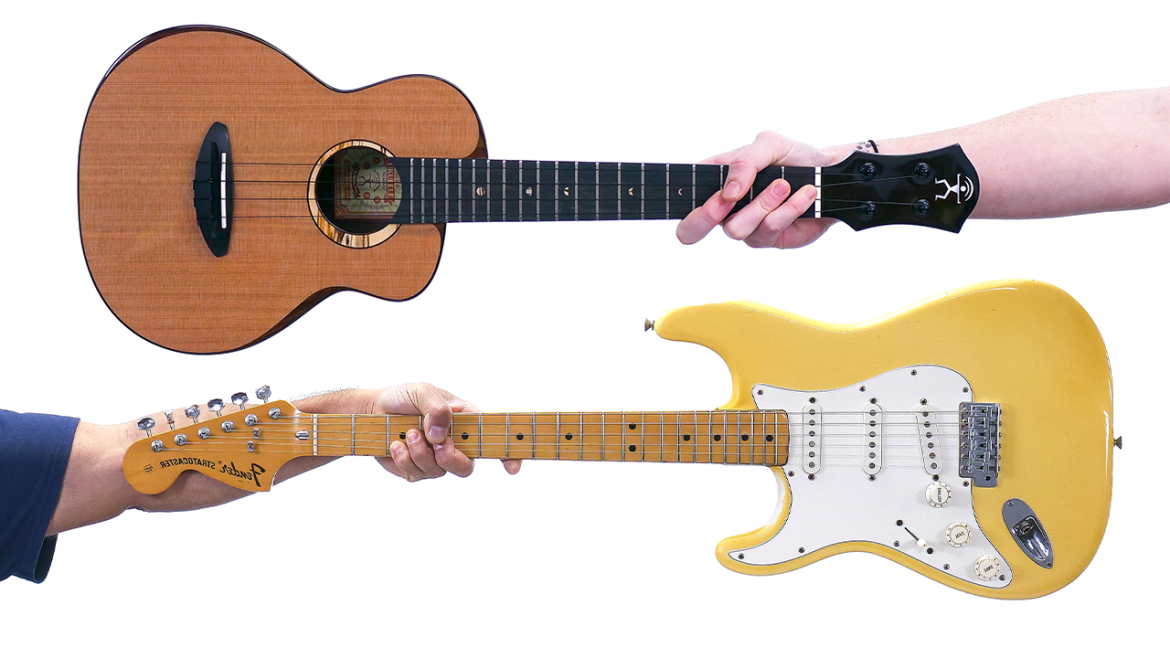 Have you ever wondered how the ukulele and guitar are different from each other? In my own personal journey with music, I took guitar classes as part of my studies when I was a music major in college and played piano as my primary instrument. And to be completely honest – I struggled with the guitar.

Fast forward, twenty-something years to the first time I picked up a ukulele, and it was love at first strum. I had no idea how ukulele and guitar are different, but I took to the ukulele so quickly that I had to wonder if I was doing something wrong! After nearly a year of playing the ukulele every day, I went back to the guitar and was pleasantly surprised at what I was able to play.

The first thing that you notice is the size difference between a guitar and a ukulele. Most ukulele sizes from the tenor down to the smallest sopranino and sopranissimo are, well, smaller. It’s easy to cradle a ukulele securely in the crook of your elbow and strum away. Even the smallest of guitars, however, usually require a strap for someone to hold on securely while playing. 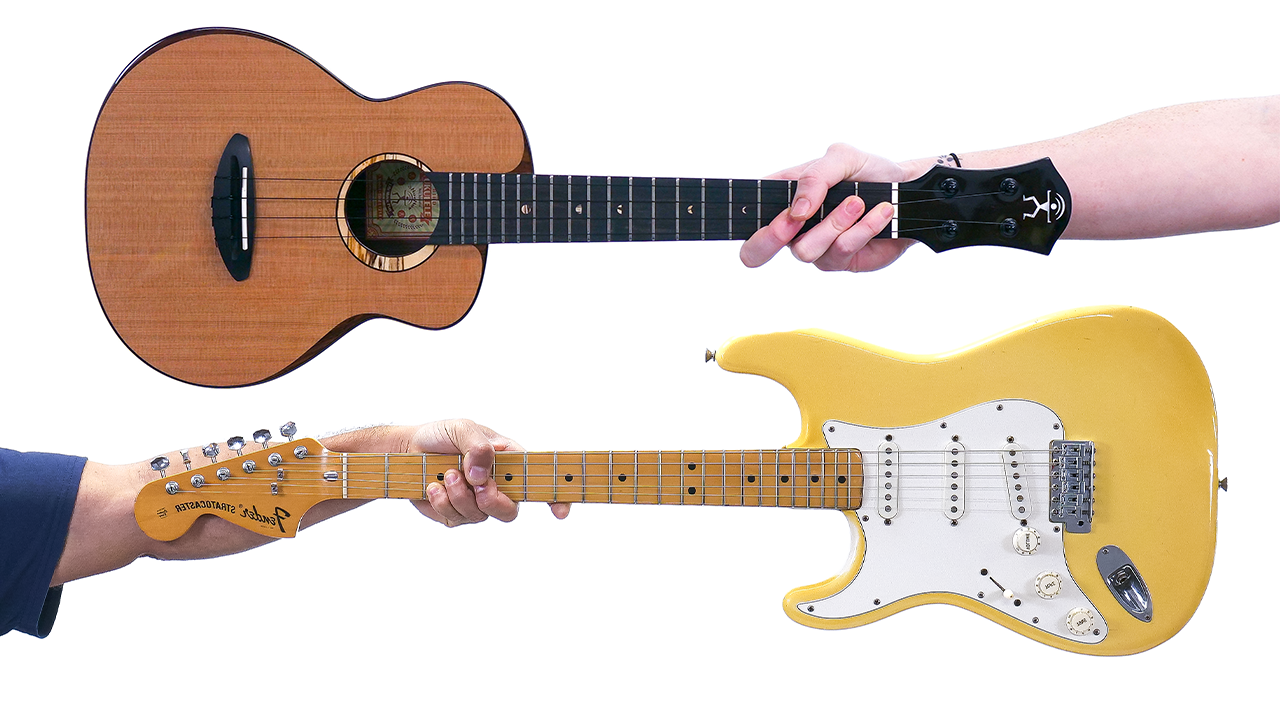 Most ukuleles range in size between 11 inches and 23 inches, making them easier for most people to hold and play. The baritone ukulele is the largest member of the ukulele family, coming in at around 30 inches long.

While the baritone guitar measures about the same as a half-size guitar, most full-size guitars come in around 40 inches long, measuring from the top of the headstock down to the bottom of the body of the instrument. The body of a guitar can have a different width or shape, depending on whether it’s acoustic or electric. There are also distinct body shapes for the guitar, including dreadnought and cutaway.

Most of the body shapes of the guitar have been adapted and adopted by ukulele makers, and you can now find cutaway ukuleles. There are also more ukuleles that resemble the shapes of some of the more popular electric guitars like the Telecaster, Flying V, and Iceman. Fun stuff for a budding ukulele collector!

Another thing you might notice in how the ukulele and guitar are different is the number of strings on each one. Most traditional ukuleles have just four strings. You might find that there are more ukuleles out there with five and six strings, but your traditional old-school ukulele has just four. This goes back to the instruments that were the predecessors of the ukulele back in Portugal and Spain in the late 19th century. Guitars, on the other hand, have two additional strings for a total of six strings. Interestingly enough, some music historians have noted that the guitar originally had just four strings, but the fifth and sixth strings were eventually added around the 1700s so that players could get a wider range of notes.

And in case you’ve never heard about a modern four-string guitar, back in the early 20th century, an instrument called a tenor guitar began to rise in popularity. Some folk musicians still play them today. These tenor guitars have four strings like a ukulele but are sometimes tuned differently than either a guitar or ukulele. 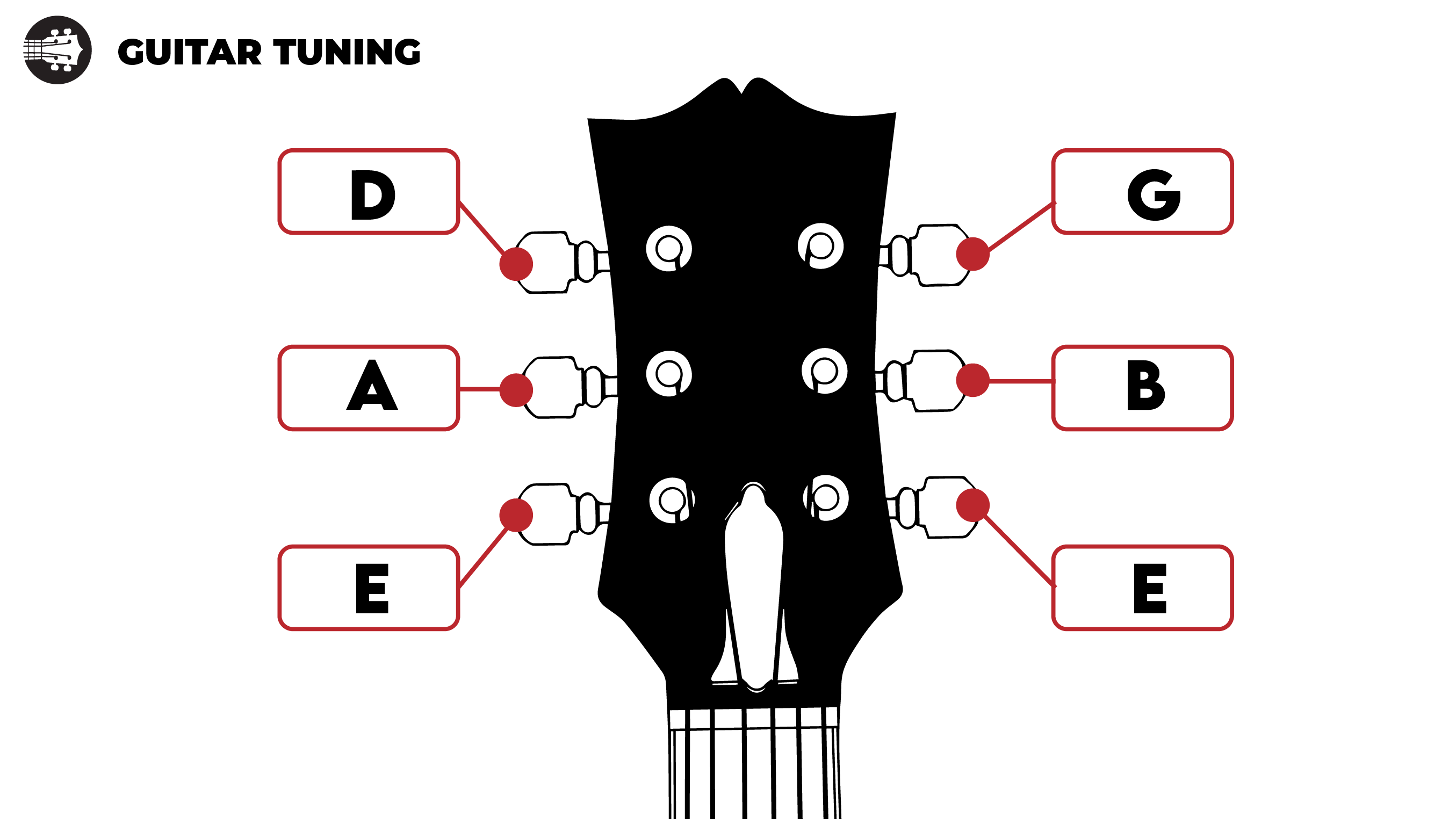 Guitars have much longer necks than ukuleles, and that means you can get more octaves out of a single scale than you can on the ukulele. A typical guitar’s range of notes goes from a low E (E2) to a high E (E4). A typical soprano ukulele can only go from middle C to high A (A5).

To understand how that range works, we have to look at a keyboard for a moment. If you know where middle C is (that’s the C string on ukuleles), we call that C4. In written musical notation, that’s the C note that’s located one line below the bottom of the staff on the G clef. The “4” that comes after the C refers to the frequency – or the number of vibrations – a string makes when plucked or strummed.

If you’re playing the ukulele equipped with a low G string, then you can drop down four notes below that – two lines below the staff on the G clef – for your lowest starting note.

A typical guitar, however, starts on E2 – approximately 11 musical steps BELOW middle C. That offers a much larger range for composing and playing music. It’s great if you like to play endless scales when you’re warming up – but if you like your scale exercises short and sweet, the ukulele is definitely a better deal!

While the ukulele did evolve from a guitar-like ancestor, the tuning of a ukulele is much different than a guitar. One of the things that sets a ukulele apart from a guitar is the re-entrant tuning. Re-entrant tuning on a ukulele begins with the fourth string tuned to G that is five steps above middle C. Then the third string is tuned to that middle C, followed by E and then A.

Guitars start with a low E string, followed by A, D, G, B, and then an E that is two whole octaves above that first low E.

Read more: The Ukulele Is Easy To Learn!

If you’re playing the baritone ukulele, then most of the time, you’ll tune your instrument just like the top four strings of a guitar, with D, G, B, and E.

Last but certainly not least, it’s the sound difference between a guitar and a ukulele that sets them apart. The ukulele is known for its light, cheerful, happy timbre, and many people associate that sound with the ukulele’s adopted homeland of Hawaii.

While you can get some nice music out of the higher registers of a guitar, it’s the guitar’s deep and moody low notes that make it distinctive in the world of stringed instruments.

One distinct difference between the ukulele and the guitar is that while not all ukulele music is suitable for guitar, I’ve yet to hear a song played on the guitar that doesn’t sound just as good on the ukulele! Maybe I’m a little biased in my love for the ukulele, but the ukulele definitely feels like the more versatile instrument to me.

You can hear sound samples of all the instruments – both guitars and ukuleles – in the Uke Like the Pros store. Check out all the options available to you and you’re sure to find the perfect instrument for you!

Which Ukulele String Is the Thickest?

Between guitar and ukulele, I first played guitar only being able to chord basic chords and a few Barre chords. I only knew my guitar notes UpTo the fifth fret in my early teens. It was through the ukulele in my late 50s that I broadened out learning all the notes on the frets of each string to be able to play lead parts and riffs. I also learned the CADGF (CADGE guitar) system to learn chords on different frets on uke first. This allows me to follow my voice on uke or guitar; ex lower voice set of chords on verses and higher voice set chords for choruses, and bridges. Pre choruses depend on where the melody is going. I now can play most songs rhythm or lead on either instrument. Most of my 5 ukes are strung with low G.