Chat with us, powered by LiveChat
Top Posts
How to Play Master of Puppets...
Do Ukulele Skills Transfer to Guitar?
Basic Ukulele Chords Everyone Should Know
Which Ukulele String Is the Thickest?
How Ukulele and Guitar Are Different
Ukulele Keys And How To Understand...
Are Ukulele Strings Metal or Plastic?
Ukulele Jam Sessions!
Is the Ukulele Easier than the...
How to start playing your Ukulele...
Home Songs How to Play ‘Fly Me To The Moon’ on Ukulele
SongsTutorials

How to Play ‘Fly Me To The Moon’ on Ukulele

This Classic Song Is Easier To Learn Than You Think! 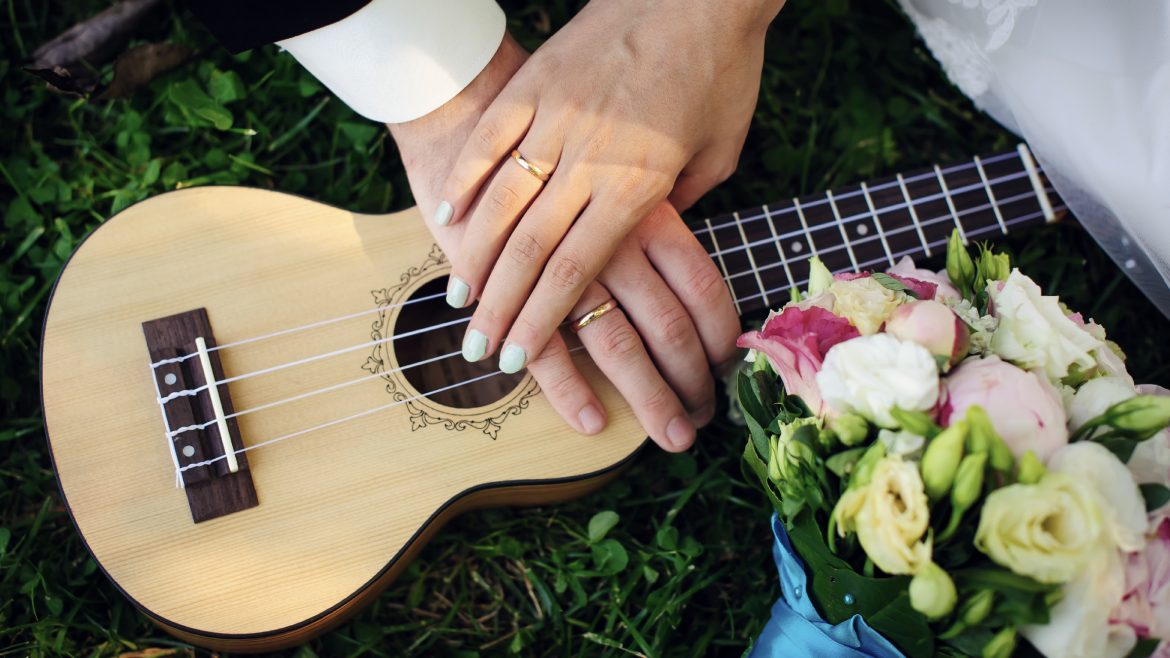 You would be hard-pressed to find a more romantic song than ‘Fly Me To The Moon’ by Frank Sinatra. This classic song by the one and only ‘Chairman of the Board’ has become one of the most beloved songs ever recorded and performed, and has remained an extremely popular ballad for people of all ages.

Although it was originally written and titled ‘In Other Words’ by Bart Howard in 1954 and then recorded with Kaye Ballard that same year, Frank’s rendition 10 years later catapulted the song into the stratosphere, going on to sell several million copies worldwide.

‘Fly Me to the Moon’ is a classic song that has stood the test of time over the years, and one that stands far above most songs that are considered to be classics. Whether it’s being played with a full band in a more orchestral style, or simply being played more intimately on the ukulele, it’s a song that is always a crowd-pleasing favorite.

So, in this article, we’ll go through the chords, the timing, the strumming pattern, and also give you some useful tips on how to play the song. ‘Fly me to The Moon’ is a bit of a departure from many other uke songs due its jazzy style and structure, but if you take your time learning the song, you will find it to be a very enjoyable playing and learning experience.

Read more: Ukulele string order and HOW TO property tune them

As mentioned, some of these chords may seem a little new and unusual if you’re not used to playing jazzier songs. But, ‘Fly Me to the Moon,’ was originally written in 4/4 time and can be played entirely with downward strums, which makes it all the more easy to learn.

If you’re new to playing the A-minor 7 and D-minor 7 chords, you can choose to play standard A-minor and D-minor chords, which will still sound great. Also, when playing the G7 chord, don’t be tempted to play the simpler version that uses open strings. Instead, try playing the G7 chord where you place all four of your fingers slightly higher up on the fretboard while pressing down on all of the strings. 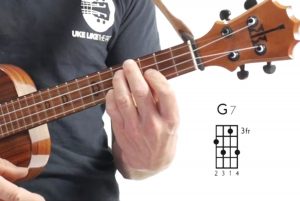 A variation of the G7 chord

There are several ways to play the F-major 7 chord, but for ‘Fly Me to the Moon,’ playing the chord with your fingers towards end of the fretboard while simultaneously muting the C string really give the song a little extra character. It will still sound good if you play the C string in the open position, but muting the C string works extremely well with this song. 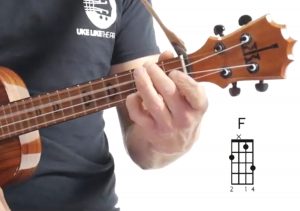 Get a FREE Chord Chart here!

The first eight bars of ‘Fly Me to the Moon’ contain almost all of the chords that you need to learn how to play. So, once you get comfortable with those chords, the second half of the song and the ending won’t be much of a challenge.

As for this D-minor 7 chord, there’s another way to play it that’s different from the first measure of the song. For this chord, use your index finger to bar all four strings on the fifth fret. After playing this variation of the D-minor 7, it’s easy to transition to the next set of chords. 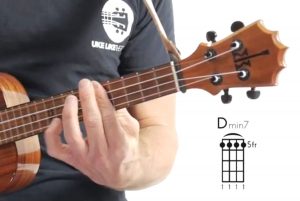 However, instead of playing a standard D-minor 7 with the first four beats, play a barred D-minor 7 where you are barring the entire fifth fret, just like in the third section of the song. When you feel comfortable with these chord progressions, it’s time to move onto the ending. 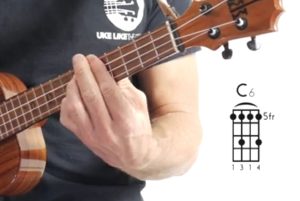 The barred version of the C6 chord

Since ‘Fly Me to the Moon’ is in 4/4 time, it’s a simpler song than you may think, despite the jazz chords and swing beat. Above all, when first learning it, start slowly with gentle, downward strums until you feel like you have memorized the song structure.

Once you get comfortable with the timing and the chord changes, you can start to add gentle, upstroke accents at the end of every second and fourth beat, as well as incorporating muted chords with the downstrokes. But, again, learn the chords and their progressions before you begin focusing on the strumming.

‘Fly Me to the Moon’ is a classic among classics, but surprisingly easy to learn once you take your time to practice it. The chords may be a little unusual if you’re not familiar with jazz or big band music, but being rooted in 4/4 time make it a surprisingly easy and fun song to learn.

So, while you are learning how to play it, be sure to take your time, focus on your strumming and chord changes, and above all, make sure that you enjoy your learning experience.

Also, be sure to check out our collection of online lessons, books, and our online store for all your ukulele needs.

How to Play the Em7 Chord on Your Ukulele

How to Play the Cmaj7 Chord on the Ukulele

The Easiest Christmas Song to Play on the...

Play Ukulele And Keep The Peace