Chat with us, powered by LiveChat
Top Posts
How to Play Master of Puppets...
Do Ukulele Skills Transfer to Guitar?
Basic Ukulele Chords Everyone Should Know
Which Ukulele String Is the Thickest?
How Ukulele and Guitar Are Different
Ukulele Keys And How To Understand...
Are Ukulele Strings Metal or Plastic?
Ukulele Jam Sessions!
Is the Ukulele Easier than the...
How to start playing your Ukulele...
Home Songs How to Play ‘Creep’ on the Ukulele
SongsTutorials

It's Easier Than You Think!

If you’re familiar with alternative music from the 90s, you definitely know the song ‘Creep’ by Radiohead. It’s a beautiful and sad song with some heavy-duty guitars, and it’s a song that has stood the test of time to become an extremely popular tune to listen to and also play on the ukulele.

A breakout hit for Radiohead, it was first released as a single in 1992 and then later appearing on their debut album the following year. ‘Creep’ was not a smash hit when it was first released, but gradually went on to gain worldwide success, selling millions of copies over the years.

Despite its unique style and overall tone, ‘Creep’ is a surprisingly easy song to learn on the uke, using only four chords, which repeat themselves throughout the entire song. Once you learn the chords and the strumming pattern, you’ll be ready to play it in no time.

The Ultimate Ukulele Fake Book has over 400 Songs for you to learn!

So, in this article, we’re going to show you how to play ‘Creep,’ as well as giving you some useful tips along the way. As heavy and heartfelt of a song that it is, its simplicity is part of what makes it such a great song, and one that you can learn to master on the ukulele more quickly than you may think. So, let’s get started!

As mentioned, there are only four chords to learn for ‘Creep,’ and they are played in the exact same order with the exact same tempo and length throughout the entire song. The chords, in order, are G, B, C and C-minor, each of which are played for 8 beats. (Or one full measure.) 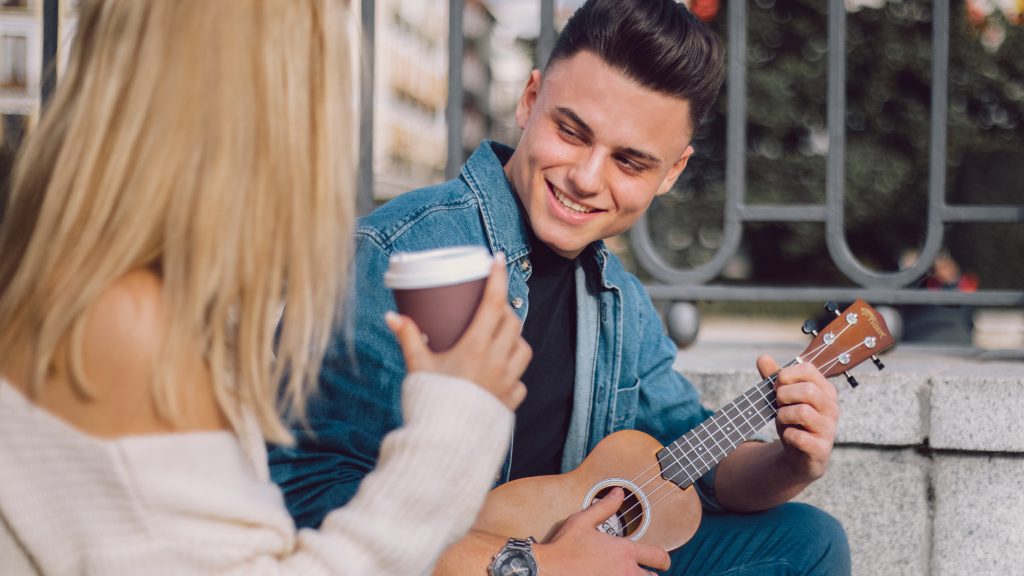 Read more: How to play “Riptide” on your Ukulele

From there, to transition to the C-minor chord, use your index finger to bar the A, E and C strings on the third fret, then place your ring finger on the fifth fret of the G string. It can be helpful when transition from the C chord to the C-minor chord to use your ring finger as an anchor since it won’t change positions between these two chords. Though it might seem a little complicated at first, after a little practice, you will find that it will make the chord transition more seamless.

Another great thing about ‘Creep’ is that it can be played with several different strumming patterns. Since the structure of the song is in 4/4 time and the verses and choruses repeat themselves throughout the entire song, it’s very adaptable to various strumming patterns and tempos.

With that in mind, when first learning the song, it’s a good idea to start by playing with slow, downward strums until you feel comfortable with the chord changes. Once you find your comfort zone with the chords using downward strokes, you’ll find that it’s very easy to add in some half-time, quarter-time and even eighth-time upward strokes. The possibilities are limitless with ‘Creep,’ and it’s a song that you can easily make your own.

If you need a little help learning and practicing ‘Creep,’ we have a play-along track with two different speeds to help you master the song at your own pace:

‘Creep’ is a much-lauded song from the alternative music genre, and one that almost anyone can relate to mostly because of its heartfelt lyrics. It’s an easy song to learn on the ukulele because of its repetitiveness and slower tempo, as well as being a song that allows for your own creativity to shine through due to its simplistic strumming pattern.

So, while you are learning how to play it, be sure to take your time, focus on your strumming and chord changes, and above all, make sure that you enjoy your learning experience.

Also, be sure to check out our collection of online lessons, books, and our online store for all your ukulele needs.

Good luck, and enjoy your playing!

How to Play the Dm7 Chord On the Ukulele

How to Play the F7 Chord on Your Ukulele

The Easiest Christmas Song to Play on the...

An easier way to think about the transition from C to C minor is to fully bar fret 3, and make the a shape with middle and ring finger. Then you just lift your middle finger to shift to Cmin. Same from G to B – For G, bar fret 2, and make the F shape with middle and ring finger. Again, the transition is simple – slide the middle finger over one string to make B. Then to transition to C, just slide the whole shape up the neck one fret. Its one of the coolest patterns and a great way to practice bar chords. Oh and BTW… the same pattern works for ‘All I want for Christmas’ as well 🙂

How to Play Somewhere Over the Rainbow...

5 Tips to Conquer the Metronome with...