Chat with us, powered by LiveChat
Top Posts
How to Play Master of Puppets...
Do Ukulele Skills Transfer to Guitar?
Basic Ukulele Chords Everyone Should Know
Which Ukulele String Is the Thickest?
How Ukulele and Guitar Are Different
Ukulele Keys And How To Understand...
Are Ukulele Strings Metal or Plastic?
Ukulele Jam Sessions!
Is the Ukulele Easier than the...
How to start playing your Ukulele...
Home UkuleleCare & Tips 9 Awesome Alternative Ukulele Types
Care & TipsGuitarleleUkuleleUkulele Reviews

A Beginners Guide to the Ukuleles That Aren’t Just Ukuleles 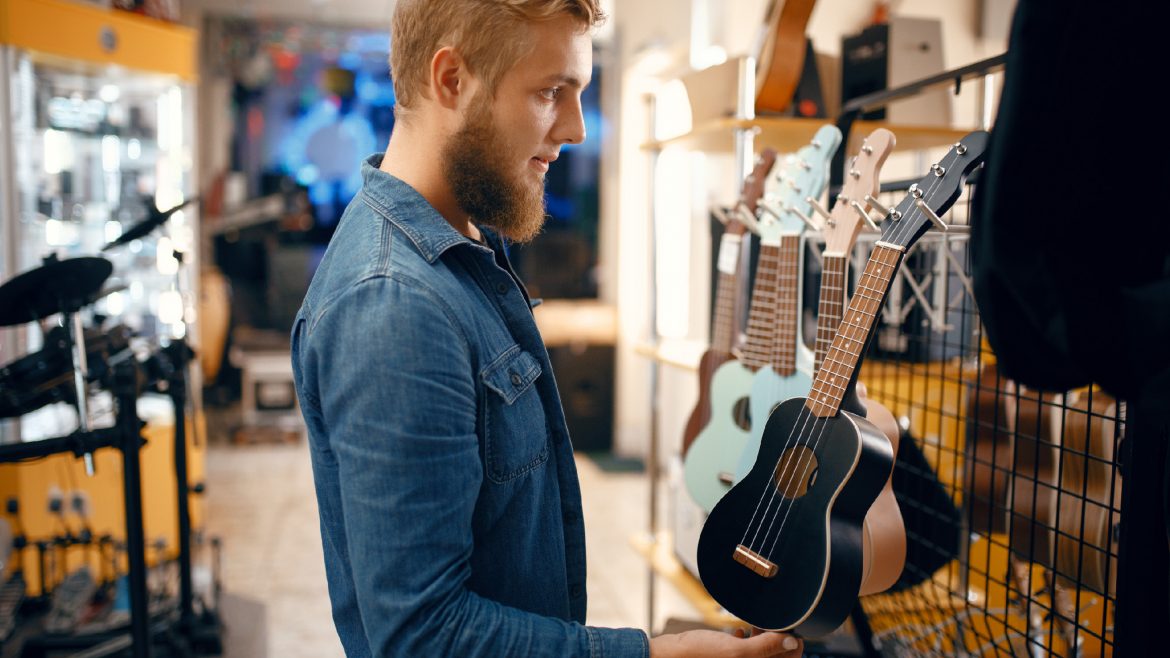 If you are reading this article, chances are you already think the ukulele is a pretty cool instrument. Heck, you might even be familiar with the four standard sizes, and some of the many different wood options available to you, the ukulele collector. But do you know all 9 of these awesome alternative ukulele types?

The banjolele, as the name implies, is a cross between a banjo and a ukulele, and is probably the most popular specialty ukulele out there. 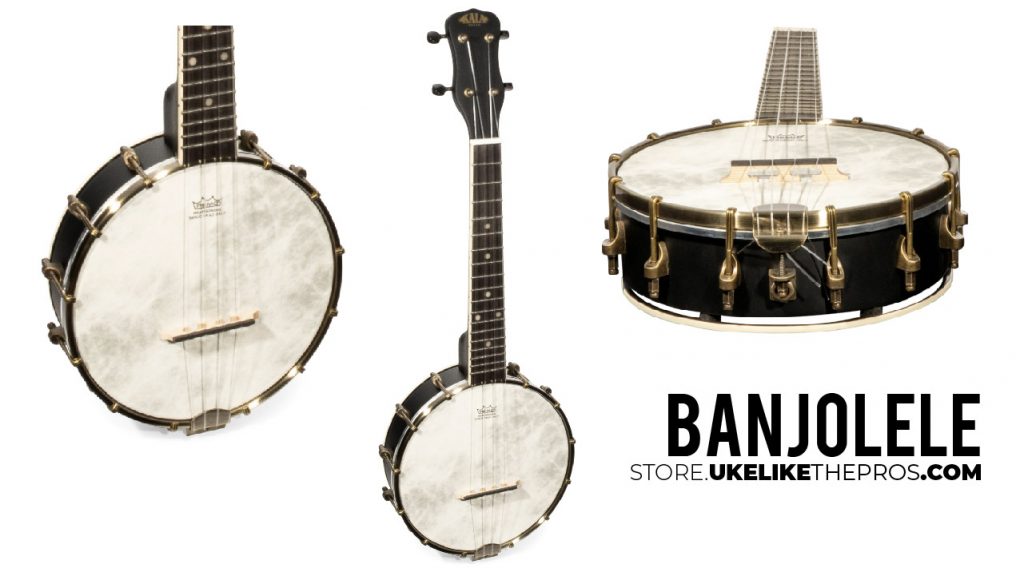 While it may look more like a banjo, it uses the standard GCEA uke tuning (generally with a high G), and comes in the typical uke sizes – soprano and concert are most common – so it is really just an ukulele with a banjo body or “pot.” This means there’s no learning curve, if you can play it on the uke, you can play the banjolele!

Made popular by Vaudeville performers in the 1920’s and 1930’s, the banjolele’s loud, twangy sound might be described by some as ‘hokey’ and some would consider it more of a novelty instrument, but it is a ton of fun to play and looks cool as heck, so I’d say it is a must for any uke collection.

The guitarlele (or guitalele) is a 6 string ukulele that looks like, well… a mini guitar.

While it is another crossover instrument, it is a little less gimmicky than the banjolele. Most commonly tuned ADGCEA, the guitarlele is essentially a ukulele with two additional low strings (A and D). It is basically the same as if you put a capo on the fifth fret of a guitar (standard tuning EADGBE). 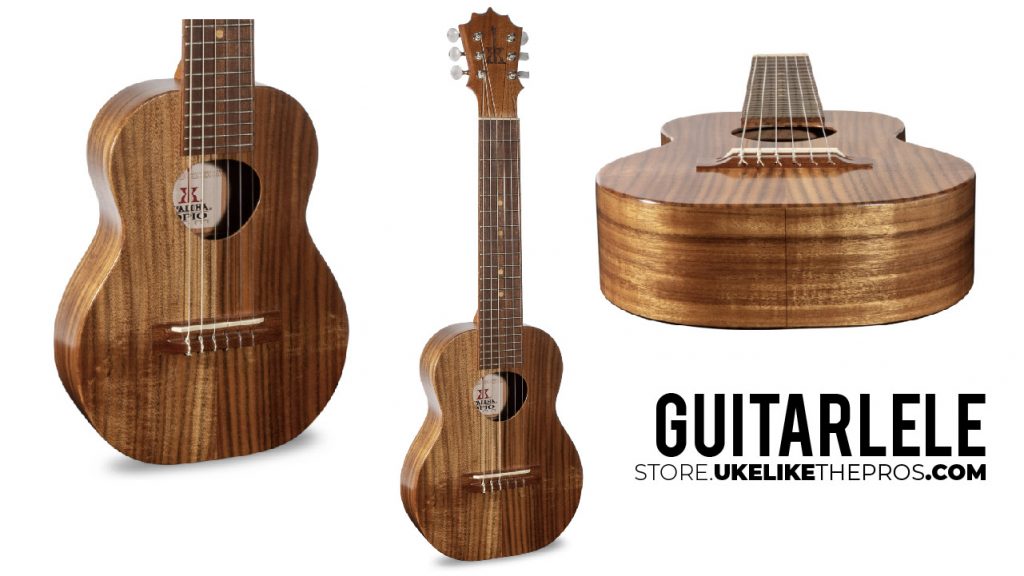 If you only play ukulele, there will be a bit of a learning curve with the additional strings, but for anyone who plays both uke and guitar, or who is looking to transition from one to the other, the guitarlele is the perfect instrument.

Read more: What’s the Difference Between a Guitarlele and a Ukulele?

Have you ever been playing around on your uke and suddenly wished you could really shred on it? Just me? Well, there is a uke for that! 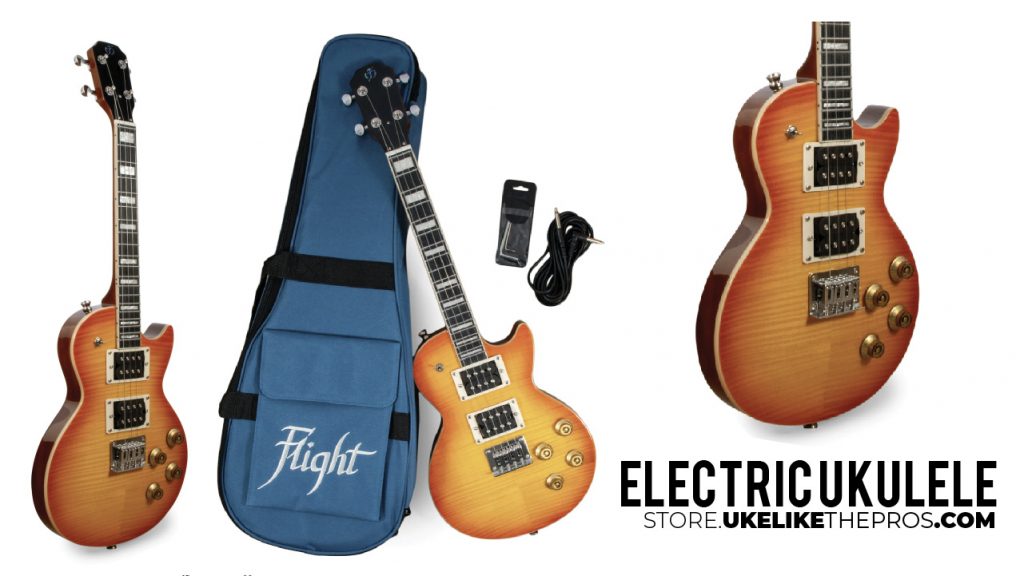 Often tenor sized, electric ukes are usually made to mimic famous electric guitar brands. Like the banjolele, in everything but appearance they are standard ukuleles – tuned GCEA – and anyone who can play the uke can pick one up and start shredding (provided you have an amp!).

Unlike the previous three entries, this ukulele is actually more like the other instrument it’s combined with than it is a ukulele. 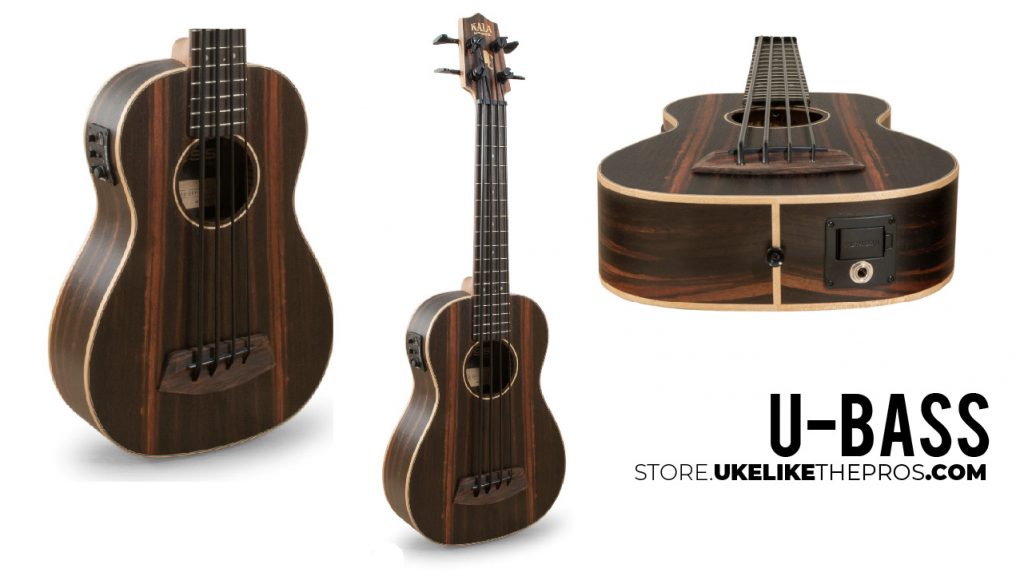 Tuned to EADG like a bass guitar (or upright bass), the bass ukulele is only really an ukulele in size. Roughly the same size as a baritone ukulele, it has a 21” scale and uses super thick strings in order to provide that deep bass sound on such a short instrument.

Of all the ukes I am covering today, the bass ukulele has by far the biggest learning curve, given the vastly different tuning and style of play. But it makes a great accompanying instrument for uke jam sessions and is also an excellent travel instrument for any bass players out there.

Bonus fact: you may have heard of the bass ukulele being referred to as a U-Bass, and assumed that that was the term for all bass ukuleles, but that is actually a registered trademark of Kala and technically only applies to their bass ukulele instruments. Sort of a Kleenex situation.

Then what in the heck, you ask, are all those extra strings for? I’ll tell you!

If you are familiar with the mandolin, an 8 stringed instrument with 4 sets of 2 strings tuned to the same note, it’s essentially just like that. When two strings of the same note are placed close together, it’s called a course – sometimes the notes are an octave apart (high and low), and sometimes they are identical. The course is meant to be played as if it is really just one string. 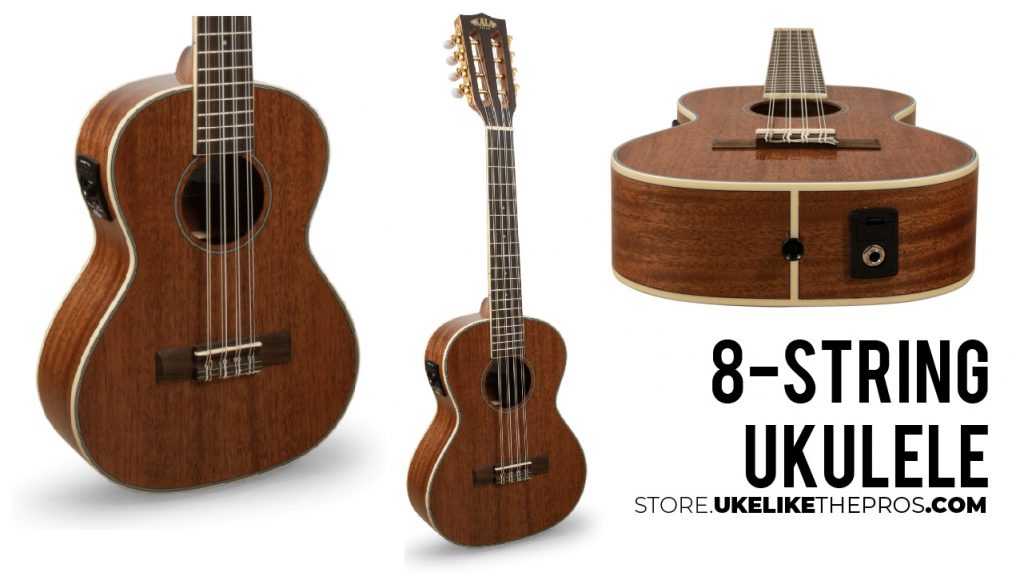 The extra string(s) give these ukes a fuller, wider sound, and are great for playing chords and for fingerpicking!

I will admit that with these two, we are starting to stretch the premise of the article  – ukuleles that aren’t just ukuleles – a bit. The sopranino and sopranissimo really belong on the size list with soprano, concert, tenor, and baritone, but since they rarely get mentioned and most people have not heard of them, I wanted to include them anyways. 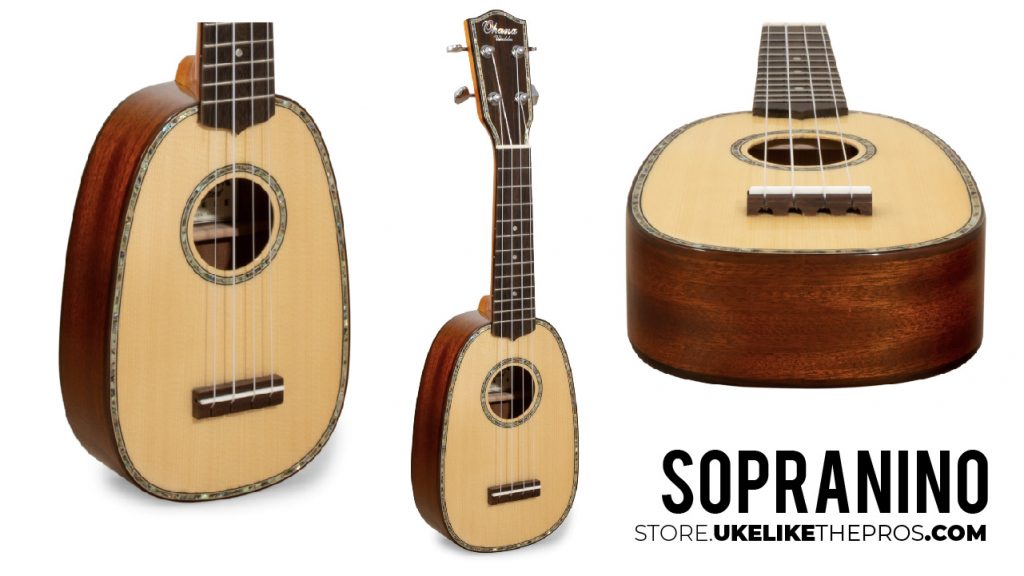 You can use the standard GCEA  tuning on sopranino and sopranissimo ukuleles, but due to how short the instruments are, they are commonly tuned up a step ADF#B in order to increase string tension.

I chose not to cover these three ukes in depth because of how uncommon they are, but If you have some extra time I highly recommend you look them up!

The harp ukulele: a ukulele an extra non-fretted neck and 4 harp strings.

Fan fret ukuleles: ukes with frets that gradually change angle the further they get from the center of the fingerboard for ease of playing.

The tiple: a 10 stringed ukulele with two sets of two strings and two sets of three! strings – tuned Gg-CcC-EeE-AA.

I hope you’ve enjoyed this post and maybe have discovered a new uke or two!

For more lessons on chords, techniques, and songs, make sure to check out our site www.ukelikethepros.com.  We offer you a bunch of great ukulele content that comes hand-in-hand with an awesome ukulele community that will support you in this journey.

How To Play The A Major Scale...

The Most Important Strum Pattern Ukulele –...